Bogbereth is the Poisoned Queen of Himbar, who oversees the spider lair & broodling hatchery of Torech-i-Bogbereth [13.0N, 25.5W], west of Gath Forthnír. Woe to those who slay enough of the Poisoned Queen's children to draw her ire, for her strength is legendary and her wrath is deadly.

In order to get any reward for defeating Bogbereth, players will need the appropriate quest.

Bogbereth is classified as a raid boss, but does not require a full raid of 24 to defeat. This is a good fight to introduce neophytes to the basics of raiding, since she is easy to get to and quickly defeated. Level 46+ is recommended. An organized group of 10-12 should be able to handle the fight, and a very tight fellowship of 6 could probably pull it off using good tactics. A solid fellowship/raid should include:

Bogbereth will descend from the ceiling of her cave after a sufficient number of Bogbereth Broodlings have been slain in her chamber. Prior to this, an Elite Master spider called a Bogbereth Matron will also appear to defend the brood. (It appears that the matron appears after 10 broodlings have been killed, and Bogbereth itself after an additional 4 killed broodlings if the appearing matron is NOT killed; otherwise a lot more broodlings may need to be killed before Bogbereth spawns.)
The matron can be defeated, mezzed, or distracted by the off-tank depending on the size of the group. Once the guardian has had a chance to lock in Bogbereth's aggro, the DPS can start pounding away. Keep in mind that leaving the hatchery area can cause Bogbereth to reset.

Throughout the fight, Broodlings will continue to spawn. They tend to go after the Minstrel, but they are weak and can be swiftly dealt with by AoE attacks. If the matron is defeated, another may spawn. The Lore-master(s) can usually keep the matron mezzed if it is outside the range of the AoE attacks. 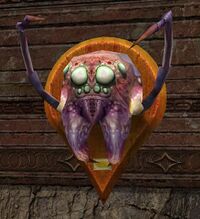