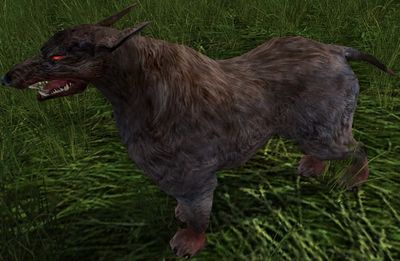 Barghests are a species of Beast and Ancient Evil.

Barghests are vicious, corrupt hounds, known for their savage bite and chilling howl. The term is mostly used to refer to the red-eyed dogs that stalk haunted burial grounds, battlefields, and other places under an evil influence. However, in a broader sense it applies to all hostile hounds, ranging from wild beasts to Ancient Evil spirits that take the form of a hound.

The fearsome hounds kept by some farmers and guardsmen sometimes resemble these creatures, with their sharp teeth and pointed ears. Unlike those tamed animals, Barghests are a menace to adventurers and travellers.

Locations where Barghests can be found include:

Barghests are always aggressive, though a rare few will first threaten. They are typically of Normal difficulty and sometimes Signature.

Barghests are more resistant to cries and, to a lesser degree, tactical attacks, than to songs and physical attacks. Their mitigations are lowest against Fire damage, Light damage, and Westernesse damage.

The fear these creatures inflict can cause their enemies to be Silenced, Unsettled, or Chilled, or to suffer from Minor Fright or Fright. Their teeth can inflict a Serious Wound. Some Barghests attack the legs, causing the victim to be Grappled. While the target is immobilized, the Barghest inflicts a Vicious Bite which does continuous damage, or a Slavering Bite which steals the morale of the target.

As they are cruel creatures, often affiliated with the Dark Lord, and needlessly violent even when not, they are classified as Evil in alignment.

Common Barghests are said to have been bred from wild hounds and twisted to evil by Sauron.[1] They are classified as beasts, but their glowing eyes and chilling howl reveals something supernatural about them. They usually have dark brown or grey fur, or light tan fur with spots.

They are associated with the Dead and are most commonly seen in haunted burial grounds, battlefields, and other places under an evil influence. Prominent among these are the Barrow-downs of Bree-land and the Fields of Fornost. They are also sometimes trained and used by Angmarim.

Black Dogs are the breed of Barghest found in the Scuttledells of Mirkwood. These beasts often look like common Barghests, but some look like the Swert-hounds of Rohan. Some of them are less aggressive and will threaten before attacking, however they have also been known to serve the Orcs of Gathbúrz.

Cun Annun (Dunlendish for Dogs of the Underworld) are Ancient Evil spirits in the form of white hounds with glowing red eyes. They haunt Enedwaith, and are associated both with the Dead of the Lich Bluffs and with Gwyllion, the Old Woman of the Mountain.

It is uncertain if these are possessed mortal creatures or spirits taking a physical form of their own, but they leave remains upon death just like other Barghests. They are known to prey on Dun Oxen.

Natural hounds that are hostile are classified as Barghests. Though they are mundane in nature, their viciousness soon removes the illusion of a happy tail-wagging dog. Some of these beasts are wild and some are trained for war or for hunting, and all are as dangerous as true Barghests.

Wild hounds can be found in Eorlsmead in the Great River region and the Gravenwood of Dunland. They usually have brown, grey, or black fur. [2] Trained hounds are known to be utilized by Dunlendings, Corsairs, and Variags.[3]

Swert-hounds, so named by the Rohirrim, are unnatural hounds that have recently appeared in the eastern reaches of Rohan, in the East Wall and the Eastfold.[4] These creatures of Ancient Evil seem to be the canine equivalent of láthbears: animals possessed and physically warped by a fell spirit. They have much less hair than most hounds, with bald legs and sides and only a dark shading on and around their heads and forequarters. Most of their grey and black hair is in a long, tangled ridge along their upper chest, neck, and back, and tufts on the end of their tail and on their forelegs.

Barghests are inspired by real life legends. In British folklore, Barghests and black dogs are ghostly or demonic dogs that portend death if not slay their victims outright. Cun Annun are based on the Cŵn Annwn of Welsh mythology, which are spectral hounds of the Otherworld.

In the context of Middle-earth, Barghests are possibly as to dogs as Wargs are to wolves. They may also be inspired by Werewolves, which are described in The Silmarillion as wolves possessed by an evil spirit. These are mentioned, but not described, in The Lord of the Rings.