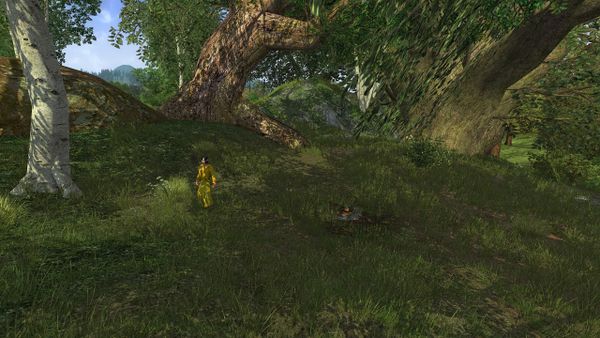 The camp is located on a hill in a glade among birch trees overlooking the village of Woodhall. This may be the camp where Gildor Inglorion invited Frodo to feast and stay while they were headed eastwards. And it may be from here that the elves, much later, set out for the final journey to Grey Havens together with Frodo and Bilbo.

"... the Elves turned aside from the path. A green ride lay almost unseen through the thickets on the right; and this they followed as it wound away back up the wooded slopes on to the top of a shoulder of the hills that stood out into the lower land of the river-valley. Suddenly they came out of the shadow of the trees, and before them lay a wide space of grass, grey under the night. On three sides the woods pressed upon it; but eastward the ground fell steeply and the tops of the dark trees, growing at the bottom of the slope, were below their feet. Beyond, the low lands lay dim and flat under the stars. Nearer at hand a few lights twinkled in the village of Woodhall. — The Fellowship of the Ring, by Tolkien