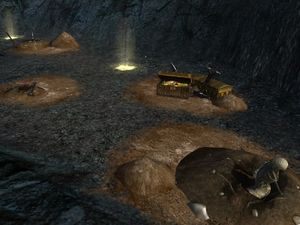 The Treasure Hunt (or Buried Treasure) event is a special event at the Treasure Field Base Camp in Ered Luin [18.7S, 98.2W] where players can dig for buried treasure and Buried Treasure Tokens that can be bartered at the base camp for rewards. This event is not tied to any seasonal festival but will appear throughout the year. When active, players can get a ride to the Treasure Field Base Camp for free from "Festival Announcers - Stable-masters" in Bree, Celondim, Michel Delving or Thorin's Gate.

During the event in August 2014, the Domesticated Cave-claw was not available from dig site drops and could not be bartered from the Reward Vendor, Marís. Now it has been added at the reduced cost of 5 tokens.[1]

The object of the treasure hunt is to find treasure in the Buried Treasure Field northwest of the Treasure Field Base Camp. After completing the introduction quest, the dwarves at the camp give players three tools for finding treasure: Treasure-hunter's Picks, Dowsing Gems and Trained Cave-claw Cages. Each of these items are consumed on use and more are available from repeatable quests as well as in treasure from Dig-sites. In addition, the Barter Vendor Sigtír offers Dowsing Gems and Trained Cave-claw Cages in exchange for Buried Treasure Tokens, and the LOTRO store sells Treasure-hunter's Picks.

Dates of the Treasure Hunt event

From the surface, all Dig-sites look the same, but there are four sizes of treasures underneath: Small, Medium, Large and Huge. There is only one Huge Dig-site per round, and when someone digs it up, the round is over, all Dig-sites despawn, then a new round begins with new Dig-sites, one of which is randomly a Huge Dig-site. Additionally, a round will be over if more than half of the Dig-sites have been dug up or an hour has passed since the last round started. While there are lots of Small Dig-sites, there are only some Medium Dig-sites and fewer Large Dig-sites. A Treasure-hunter's Pick is needed to dig at a Dig-site and retrieve the treasure below.

Each dig site contains an amount of Buried Treasure Tokens based on the cache size and also has a chance to contain a Small, Medium, Large or Huge Treasure Cache depending on the size of the Dig-site. Dig-sites may sometimes contain Treasure-hunter's Picks, Dowsing Gems, or Trained Cave-claw Cages.

Dowsing Gems must be used with a Dig-site selected and will give a reading indicating the size of the treasure buried underneath the selected dig site. The reading appears as overhead text as well as in the chat log.

When a player uses a Trained Cave-claw Cage, it releases a Cave-claw that will seek out the largest Dig-site within 20 meters, run to it and tell you the size of the treasure buried underneath. The reading from the Cave-claw appears as overhead text but not in the chat log.

Each of the Treasure Caches either contain an amount of Buried Treasure Tokens,

Treasure-hunter's Pick and/or a chance for one of the caches listed below. Some, but not all, items are also available from the Reward Vendor, Marís, in exchange for Buried Treasure Tokens.

* Denotes an item only available from treasure caches.