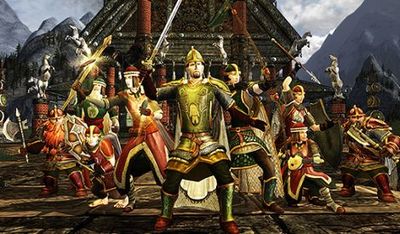 Seal , as well as other items. They can be redeemed for a very wide variety of items including armor, jewelry, weapons, crafting shards, single-use recipes, reputation items, cosmetic items, decorations, and both minor and major class quest items. The marks can also be spent on improving your character, and their personal skirmish soldier, while in skirmishes.

There are currently 19 skirmish instances, set in different locales throughout Middle-earth. They become available as a character levels up. Several of the higher level skirmishes are integrated with the epic quest story line so they are not available until a character reaches the appropriate place in the epic story. Most skirmishes are either offensive in nature, where the players advance at their own pace as with most instances, or defensive, where the players withstand repeated waves of enemies. They all follow a simple storyline, such as freeing Bree from a raiding band of half-orcs or Candaith being attacked at night on Weathertop. Most skirmishes are associated with the appropriate reputation faction, so that, for example, completing skirmishes that are set in the Shire increases one's reputation with the hobbits' the Mathom Society. Every skirmish has a skirmish instance deed associated with it to complete every special encounter possible in that skirmish, which earns the player a title. Most skirmishes have an associated daily quest.

Skirmishes and skirmish camps are intended to represent the increasing spread of war and bloodshed across the entirety of Middle-earth. Skirmish instances, like classic instances, can be created through the instance menu and joined by any fellowship, or raid, anywhere on Middle-earth at any time. Transactions involving skirmish rewards, however, must be completed either at any of the skirmish camps near major cities or at the vendors inside player-owned housing areas.

Skirmishes are highly customizable, allowing the player(s) to specify a skirmish's level, how many players it is intended for, and the difficulty tier of the instance. While every skirmish has a boss at its end that doesn't change in different run-throughs, all other elite enemies, referred to in skirmishes as lieutenants, are randomly generated from a wide range of different lieutenants that demand very different strategies to defeat. There are also many optional encounters in each skirmish that may or may not be available on any given run-through. All these factors amount to a practically limitless amount of variation for skirmishes.

There are three types of skirmishes.

Mobs are random in Skirmishes. But you can expect similar mobs to usually group together. As your level increase the same mobs will match. As your group size, tier or level increase so do the number, hardness or type of the mobs increase.

Lieutenants are elites that randomly accompany enemy groups in skirmishes. They randomly drop

Skirmish Tokens and Emblems. There are many different types of lieutenants, all with their own names, appearance, and abilities. Each type is designed to encourage a certain strategy or prioritization of targets; for example, the Zealot of Pain buffs all other enemies present as he takes damage, encouraging players to kill him last. There are deeds for killing each type of lieutenant a number of times, which reward the player with a large amount of skirmish marks. Different skirmish instances have slightly different varieties of lieutenants that it may contain, so running the same skirmishes repeatedly will complete lieutenant deeds faster.

Each Skirmish can be played with a wide range of players, the bigger the group the better the rewards:

Skirmish Tokens and Emblems and the chance of special encounters.

Every player character has one NPC that they can summon to fight alongside them while skirmishing, much like a pet. The soldier does not preclude the use of the Lore-master's pet or the Captain's herald, meaning those classes can have both their soldier and their pet or herald fighting together. The soldier, however, cannot be commanded with nearly as much precision as a pet. They can be ordered only to attack a target or to disengage, and the attack command has a cooldown of 1 minute. Generally, soldiers act like a pet in guard mode with assist off. They use all equipped abilities automatically as they see fit.

'Soldier' is a generic term that does not refer to the soldier's class. There are several classes that are roughly analogous to player classes, and several different abilities of each class for the player to choose from when customizing their soldier. Skirmish marks can be spent on improving the soldier, by increasing their base attributes as well as the effectiveness of their individual abilities. This increases one's performance in skirmishes and therefore amounts to an investment in skirmish marks. The soldier's appearance can also be altered by traits bought with skirmish

At the start of the Skirmish a quest will auto-bestow upon you, with the objectives of the skirmish.

Slaying all the different skirmish instance specific Encounters, rewards with a skirmish specific title. Slaying Skirmish Lieutenants will reward titles (mobs must not appear grey to your character, they must be around the same level as you are) Each Lieutenant type has its own deed chain, which follows a certain rule.

Skirmish Camps are located across the entirety of Middle-earth near major cities. Enter a camp to trade your Marks for rewards. For a list of all locations see Skirmish Camps.