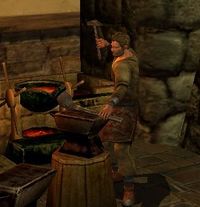 "Metal armors and sturdy shields are the metalsmith's domain. Though their initial products may be of simple make, eventually their skills will allow them to work finer materials and greater designs."

As a metalworker, you can craft shields, heavy armour, and high-quality tools. While tools will require additional materials, most armour can be made from a sufficiently large quantity of metal ingots.

A guide to attaining Metalsmith Mastery.

A list of all component items that are used to craft Metalsmith recipes: Metalsmith Components

To critically succeed while crafting item, a Metalsmith must have achieved proficiency in the crafting tier for that item. After gaining proficiency, the base chance to achieve critical success is 5%.

A complete list of Metalsmith recipe indexes by tier:

An index of items that can be crafted using Metalsmith recipes