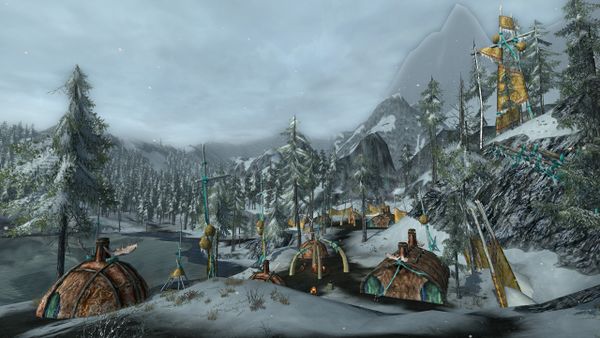 Kauppa-kohta (Lossoth for Trade Point) is a settlement located within the area of Taur Orthon, in Forochel. [3.2N, 58.0W]

For most travellers this is the first stop when heading north into Forochel, at the middle of Taur Orthon and on the eastern shores of Korkea-järvi. The village is sheltered at the foot of large snow bitten mountains, and grazed by the sun which just barely rises above the horizon at these latitudes. Some dwarves and their giant mammoths are found, trading faraway cargo in exchange for the warmest pelts of Middle-earth.

In the north-eastern corner of the village a path winds itself up the mountainside. At the end of the path are a handful of Lossoth, preparing against the threat of the Sûri-maja they have observed spying on them. The villagers are well aware of the unnatural happenings, though they do not fully understand the reasons.

Kauppa-kohta provides basic services including a Stable-master, Milestone, Mailbox, and a Tasks Bulletin Board, as well as a Supplier & Provisioner, a Healer, and many quest-givers so that outsiders may prove themselves true to the Lossoth of Forochel. 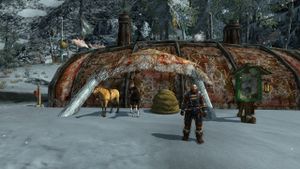 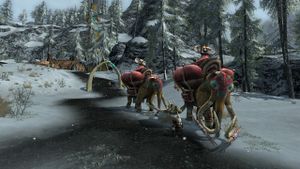 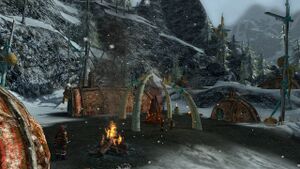 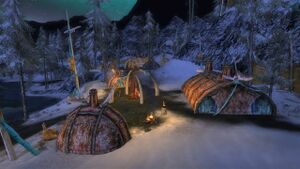 Nightfall over the Lossoth village