Halbarad (sindarin: High-tower) is a Ranger of the North; a kinsman, friend and follower of Aragorn. He is trying to coordinate efforts to hinder the advance of Angmar's army.

At the heart of North Downs, the last remnants of the House of Isildur gather in their hidden refuge of Esteldín. The tides of war crash against the stone walls of their encampment, but they are not yet strong enough to actively resist it and many of their number, including their chieftain Aragorn, still range far afield.

Halbarad, kinsman of Aragorn, struggles to unite the scattered peoples of the North Downs against the hordes of Orcs which have come down from Angmar through Ram Dúath. Like many of the Dúnedain of the North, Halbarad has many qualities of both a warrior and a lore-master. He uses his knowledge to coordinate efforts to hinder the advance of Angmar’s army until a stronger front can be established, all the while alert to the knowledge that he may be called to battle and fates unknown in lands far away. [1]

Halbarad rode to the aid of Aragorn during the War of the Ring. Leading some thirty odd Dúnedain of the Grey Company, he caught up with Aragorn at the Fords of the Isen in Rohan bearing a message from Arwen and a standard which she had made for Aragorn.

He accompanied Aragorn to a chamber high in the Hornburg, where Aragorn looked into the palantír and revealed himself to Sauron the morning prior to Aragorn's decision to traverse the Paths of the Dead under the White Mountains. Gimli, Legolas, Halbarad and the Grey Company went with Aragorn through the Paths of the Dead to summon the dead to fulfill their oath.

When they reached the entrance to the Paths, Halbarad said "This is an evil door, and my death lies beyond it. I will dare to pass it nonetheless...". He met his death in the Battle of the Pelennor Fields.

When first we meet Halbarad, he is the second-in-command of the Dúnedain behind Aragorn and leader of the Dúnedain Rangers at Esteldín. Prior to the creation of the Council of the North, he is found within his study where he formulates his plans to unite the people of the North Downs.

"Those who fight Angmar at Fornost could use your strength, if you are willing to aid them."

He has said of the Hobbits:

"A little people but of great worth are the Shire-folk. Little do they know of our long labour for the safe-keeping of their borders. Yet, I grudge it not." 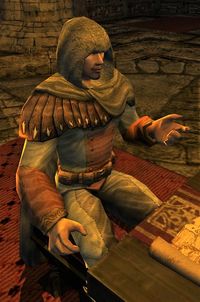 Halbarad within the Esteldín Library

After the defeat of the threats posed to the Men of Trestlebridge, the Elves of Lin Giliath, and the Dwarves of Othrikar, Halbarad can be found within the Esteldín Library. It is here that the council consisting of Halbarad, Dori, Gildor Inglorion, and Nellie Boskins discuss their next steps forward.

As the Rangers move south we encounter Halbarad in several additional locations. First in Echad Eregion. 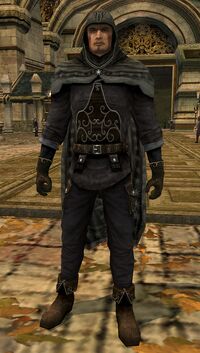 Halbarad at the gates of Pelargir

As the Rangers move into Dunland, they begin to reassemble under Halbarad.

After reuniting with Aragorn at the Fords of Isen, Halbarad travels to Isengard to free Lothrandir. He can be found at the base of Orthanc. [ 45.6S, 89.0W]

As the Grey Company travels through the Paths of the Dead and into Gondor, Halbarad takes part in the summoning of the Oathbreakers at the Hill of Erech and the Battle of Pelargir. He can be found at the western gate of Pelargir near the Statue of Thorongil. [83.1S, 34.7W]