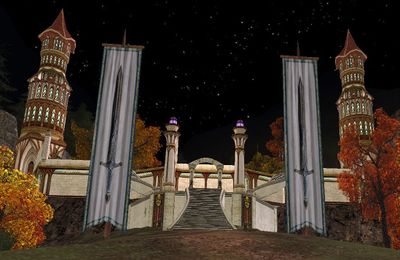 Glân Vraig is often referred to as "GV" in-game, and it is the starting location for all Free Peoples (Freeps) in the Ettenmoors. This is a primary stronghold that cannot be attacked by the Army of Angmar Monster Players (Creeps).

This settlement, in the southeastern corner of Coldfell, provides visitors with many vendors, barters, quest givers, and class specific traders for items specific to PvMP. A hidden and heavily protected path leads directly from Glân Vraig to the ruined keep of Ost Ringdyr.

When whispers of a Shadow spreading out of Angmar arose, an Elf named Lainedhel left the refuge of Imladris, also known as Rivendell, and marched into the Ettenmoors with all who would follow him. He sent out a call to the dwarves of Othrikar, the Rangers, and the Eglain, a tribe of Men who dwell in the wastes of the Lone-lands. As the Free Peoples of Eriador gathered beneath the banner of the Elves, they built the first of their fortresses: Glân Vraig.

At the southeast edge of the Ettenmoors, the Free Peoples established a fortress. The unwavering stand taken at the forest’s edge gives Angmar’s army little chance to force the Free Peoples from the holding. It is here that the staging ground for the war against the North begins. The fortress is of Elven make and stands out as a beautiful reminder of the lands that lay south of the forsaken and twisted area of the Ettenmoors.

The following services can be found within the settlement of Glân Vraig:

All Class Traders/Barterers trade different numbers of Commendations in exchange for various weapons, Jewellery, or Armour Items. Various items are available only to certain ranks.

All items are Bind on Acquire (BoA) and most items are usable only in PvMP (Monster Play) but the traders will talk (and barter) with anyone, so be careful. All items are restricted to class and level (Rank).