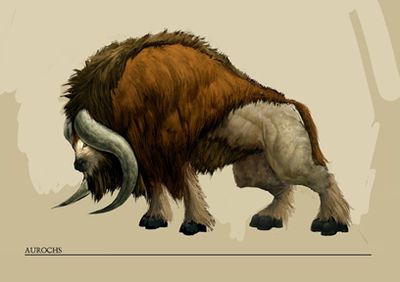 Related to domesticated cattle, these creatures are known by their massive size and long, curving horns. Among the beasts that roam the lands, few inspire such respect from hunters as the aurochs. According to the Earth-kin, they are becoming fewer, but they are still quite widespread. They can usually be found in wide open spaces such as plains and downs. They typically prefer places with plenty of grass, but are capable of surviving in less fertile environments. They can grow thick coats that allow them to thrive in cold regions.

The most famous aurochs may be the fabled Kine of Araw, the quarry of Vorondil the Hunter, ancestor of the stewards of Gondor. It is said that Vorondil took the horn of his prey, and from it fashioned the great horn later carried by Boromir, son of Denethor.[1][2]

They are important to many cultures for their meat, hides, and horns. The Earth-kin, or Jorthkyn, in particular have a strong connection to these beasts. The aurochs or lehmä is the namesake and tribal totem of their greatest tribe, the Suuri-lehmä (Earth-kin language for Great-aurochs), and even the renegade Rauta-lehmä (Earth-kin language for Iron-aurochs) have not forsaken it as a symbol.[3] Many Jorthkyn wear aurochs horns on their shoulders.

Locations where aurochs can be found include:

Most aurochs are not aggressive unless provoked, but some of them, usually the bulls, will threaten first and then attack if not left alone. A rare few specimens attack on sight. Aurochs are almost always of Signature difficulty.

Aurochs are more resistant to cries and, to a lesser degree, tactical attacks, than to songs and physical attacks. They have a slight vulnerability to Fire damage. When angered, they often Charge to engage their opponent. They use their great size to their advantage, often causing their opponents to be Knocked Down, and use their horns and hooves to inflict a variety of debilitating wounds.

These beasts are usually harmless, and even the aggressive ones are only protecting their herds and territory, so they are considered Neutral in alignment.

The aurochs of northern Eriador are distinguished by their very large, shaggy fronts and comparatively small hindquarters. Their large shoulders are covered in a "mantle" of fur for which they are sometimes named. This along with their sloping back gives them an almost bulbous shape. Their horns grow down and forward, reaching past their short-snouted faces to hang close to the ground. Their ears are hidden by their horns and hair and do not stick out to the side as they do on other varieties. Cows, bulls, and calves of this breed all have the same characteristics. Most are passive, but some of them will threaten by twisting their necks to dig a groove in the dirt with each horn.

Aurochs of the Hoar-mantle herd roam the North Downs, and their cousins the Snow-mantles can be found in the Misty Mountains and in Forochel. The white-furred Great Hoary Aurochs, among the greatest and most majestic aurochs of Eriador, are also found in Forochel. Another mighty breed, the Thistledown aurochs, dwell in the Ettenmoors. In Ered Luin, young aurochs are allowed to roam within Thorin's Gate, but the dwarves seem to keep the adults in captivity.

Aurochs of Rohan and Gondor

The aurochs of Rohan and Gondor appear to be of the same variety. They have a mantle of shaggy brown fur over short, dark fur, though they are less hairy than the aurochs of northern Eriador. The bulls have humped backs and large shoulders like their northern relatives, but to a lesser degree. Their horns grow up and towards the back, and are straighter than those of other breeds. They also have beards. The calves have slimmer bodies and neither horns nor beards. Aurochs-cows of Rohan and Gondor sometimes look like large versions of the calves and sometimes like small bulls, depending on the herd. Some bulls of this variety will threaten those who approach, while others are passive.

Dale-lands Aurochs, like Dun Oxen, are closer to domestic cattle in form than most aurochs, with longer, straighter bodies and wide-spread horns that face upward and forward. They have black or dark grey fur with a blanket of lighter-coloured fur along their back and forehead. The bulls and cows look similar, but the bulls have larger horns. They are docile creatures, even the bulls.

Dun Oxen (Uch in Dunlendish) can be found in Dunland and Enedwaith, and are the totem animal of the Uch-lûth, the Ox-clan of the Dunlendings, and their patron Munfaeril the Ox-spirit. Like the aurochs of the Dale-lands, they are closer to domestic cattle in form than most aurochs, with longer, straighter bodies and wide-spread horns that face upward and forward. Their fur is light brown or reddish. Calves, cows, and bulls all have the same basic form and all have horns, but the bulls can grow to enormous sizes and often have much larger horns. The cows and calves are docile, but Dun Bulls tend to be highly aggressive.

Goats are not truly aurochs, and are often categorized as a species of their own. However, they share several characteristics with aurochs-kind, and many specimens are classified as aurochs.

Sulokil are from Dor Amarth on the Plateau of Gorgoroth. They do not appear to truly be aurochs, however that is the closest classification known to the Lore-masters of the Free Peoples. They have much less hair than normal aurochs, and have a shell or other protective layer on their faces. Upon this grow six horns: one set near the top of the head, one set above the eyes, and one set on the nose. They also have tusks on both the upper and lower jaw and on each cheek. Smaller bony spikes grow on their shoulders and their flanks. Despite their fearsome appearance, Sulokil are completely passive unless attacked.

The aurochs was a species of wild bovine and the ancestor of domestic cattle. They went extinct in the 17th century. Real-life aurochs most closely resembled those found in the Dale-lands and Dunland. The basic aurochs model in The Lord of the Rings Online, as seen in the North Downs, does not look much like a real aurochs.

In real-life taxonomy, aurochs and goats are in the same Family: Bovidae.

Sulokil more resemble many-horned, tusked rhinoceroses than cattle. Their reinforced, horn-covered faces are also reminiscent of some horned dinosaurs, but they are clearly mammals not reptiles.