The School at Tham Mírdain 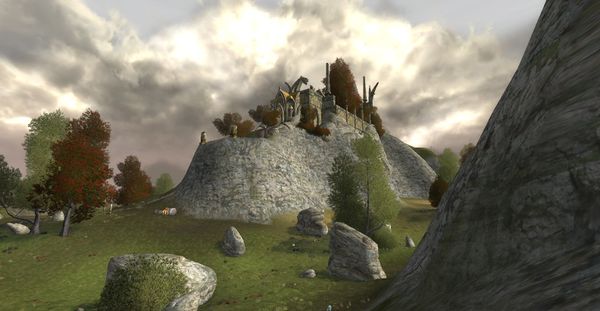 "The School at Tham Mírdain was once a pinnacle of learning during the age of the Noldor, but it has fallen into disrepair and is overrun by the minions of Saruman, who seeks greater knowledge of the Rings of Power."

The School at Tham Mírdain is an instance found within Mirobel in Eregion. [53.2S, 15.5W]

This instance is designed for a small fellowship (3 players) from level 52 and up.

Known Deeds for this instance include:

The School at Tham Mírdain Mobs

Llygad the Blade - He will wake up once you get close enough and attack, his guards will wake up one after the other and while they assist him, damage done to Llygad will be absorbed and passed on to his guard. You can simply ignore the guards and keep focusing on Llygad, the adds will fall just as quick. The last guard will run for help up the stairs, and if not stopped before reaching the side corridor, will spawn a White-Hand Leader, and then return to the fight with him. White-Hand Leaders have an interruptible heal, both for themselves, or for allied mobs, including bosses. If the last Llygad guard is stopped (like with a hunter trap, or a crowd control effect like Fear), the fight is finished.

Chief Warrior Thurgtârk - You can go up the high stairs and prepare right in front of the small final stair. Take out the two White-Hand Leaders first, then the Chief. Simple tank and spank, with interrupts recommended for the heals of the White-Hand Leaders.

Commander Târsh - Clear out the room. Once all the adds are dead, the commander will take a few steps forward and wait there until he is engaged/someone comes into range. Mostly, a simple tank and spank, except for:

Challenge: The books must be saved! put out the flames and save the books (0/10) before the timer runs out. The timer starts as a player enters the final room, or aggros one of the mobs in the room. If desired, the mobs in that room can be pulled anywhere in the instance without resetting. It may not be necessary, however, to tank the mobs outside the room, if there is at least 1 player in the fellowship who can hold aggro sufficiently to allow one or more other players to extinguish the books, without themselves pulling aggro and getting interrupted while trying to perform the extinguish operation. Historically, it has been possible for the challenge to be solo'ed by very high DPS characters, who can clear the room, with enough time left over to extinguish the books. Given scaling of mob morale, and the fact that the challenge can only be performed at current level cap, it is not known whether this has been accomplished beyond about level 100.