The Library at Tham Mírdain 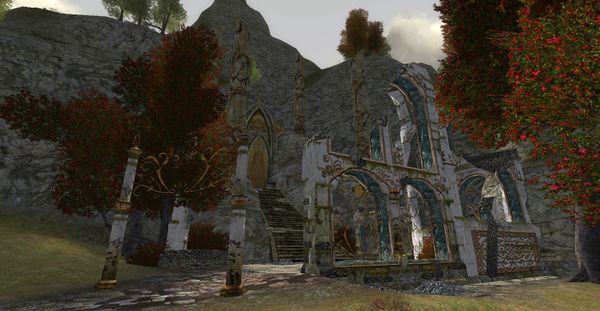 "The Library at Tham Mírdain once held much of the knowledge of the early Age and withstood the brunt of Sauron's attack against Eregion. Though much of the surviving lore was carried away by Elrond Halfelven, the forces of Angmar now seek the remnants...."

The Library at Tham Mírdain is an instance found within Mirobel in Eregion. [53.8S, 17.6W]

This instance is designed for a small fellowship (3 players) from level 52 and up.

(If you begin with either the "Biting the White Hand" or "Purging the Overmasters" quests, after completing those, you may exit and re-enter to pick up "A Matter of Knowledge", even after finishing "Chieftain Gûrsh".)

Known Deeds for this instance include:

The Library at Tham Mírdain Mobs

Commander Piztor - Basic "tank and spank". You walk into the room where you fight two waves of 3 pale folk and then the boss. Take care to NOT walk out of the room or it will reset. This includes putting Sigils outside the room (ouch!).

Commander Unudhu - First time his health drops below 50%, he will AoE stun everyone and begin to cast a healing spell that will bring him up to 100% health again. Stun will pass before he is done casting the spell, so there is time to interrupt it. Otherwise a straight forward tank and spank.

Chieftain Gûrsh - "Tank and Spank" again. Nothing special about this final boss. However, if you want an easier fight, be sure to clear out all the birds before you kill the second boss or you'll have Gursh AND about 15 birds on you. That may not bode well.

Challenge: Birds must be killed during the final fight with Chieftain Gûrsh. They must be killed after Gursh dies to get your seals and chest, if you kill them while he is still alive you will get the chest but not the seals. Completing the challenge gives Seals.