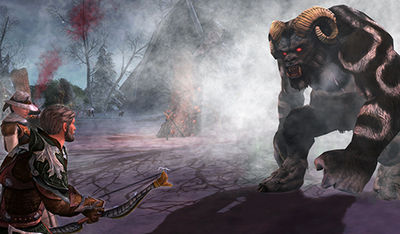 Storm on Methedras is a skirmish located atop Tâl Methedras in Dunland. This Skirmish can be completed at Solo, Duo, Small Fellowship, Fellowship, or Raid group sized by using the Skirmish Join Panel.

While the Grey Company journeyed south to the aid of Aragorn, we came upon a Dunlending hag named Gwyllion, called the Old Woman of the Mountain. She sought to raise an army of ancient evil to aid the White Hand against Rohan...it was our duty, Amlan and mine, to keep her at bay….

This Skirmish has a minimum level of 20. 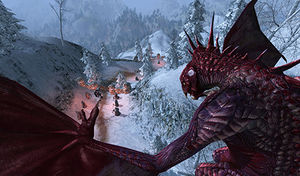 The following creatures are encounters within this skirmish:

Fight your way thru the courtyards with Saeradan. A gate will block each courtyard unit you kill all the mobs. Once you reach Gwyllion's hut you will start the boss battle.

Approaching Gwyllion's hut will start the boss fight. Gwyllion will summon a fire drake named Echrud who will crash land on her hut destroying most of it. Boar-clan mystics will appear and attmept to counter the buffs Gwyllion has placed on her servants, but will not fight. You will fight Echrud first and once he is near death or dead Gwyllion will jump in.

The drake's and the hags corpse can be looted as well as Fancy Wooden Chest. Rewards and Loot scale to the level, group size, and tier of the Skirmish. Loot is found by/at/in/from: