Mordirith (Sindarin for Black-watch), the False King, is the Steward of Angmar and one of the primary antagonists in Lotro.

Mordirith was once Eärnur, the last king of Gondor who routed the Witch-King's army at Fornost in III 1974. The Witch-king challenged him in III 2050 and Eärnur rode to Minas Morgul but was never heard from again. The Witch-king bound his spirit and gave him great power, making him Steward of Angmar and the Witch-king's most faithful servant. (Note: Tolkien never wrote anything about Eärnur after his disappearance.)

After his defeat at the hands of Narmeleth, Mordirith is sent back to Minas Morgul, receiving yet another, stronger body from his master. He now leads the Morgul-host in the conquest of Osgiliath and the siege of Minas Tirith under a new name - Gothmog (Sindarin for Oppressive Dread), the Dread Terror of Minas Morgul.

While the Witch-king of Angmar is abroad to seek the One Ring, Mordirith commands the forces of Angmar in his stead. This position leads him into direct battles with the heroes of Eriador on several occasions. Most notably, he can be found as the final boss in the last room of the Castle of Carn Dûm, called the Seat of the Witch King.

After his defeat on the Pelennor, Mordirith retreats to Minas Morgul. He fortifies his position there after the fall of Sauron and the Nazgûl, protected by the broken Gúliant and the Morgulduin to north, the Fennas Gost to the east, and the mountains of Achathras to the south and west.

Some of Eärnur's story is revealed in the Black Book of Mordor and the Tale of the Dark Tree.

Players battle against Mordirith in a number of forms and places. These include:

In addition, the player visually remembers Mordirith in:

Eärnur also appears in a number of flashbacks in the Black Book of Mordor:

"Let us put it to the test and see who is the stronger!"
"I would not thought it possible that you could challenge me for so long..."
"Let our battle be at its end!"
"I am Gothmog, the Dread Terror, and Minas Tirith shall crumble before me!" 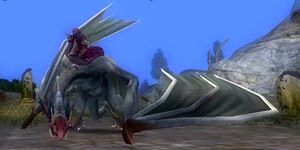