Seven Houses of the Dwarves

From Lotro-Wiki.com
(Redirected from Longbeards)
Jump to navigation Jump to search 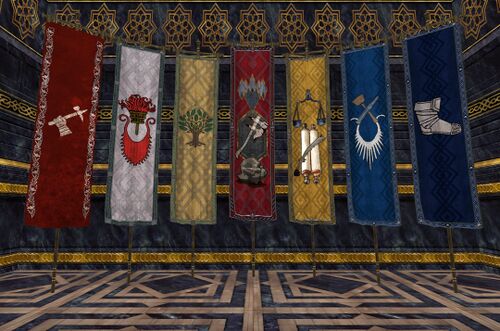 The dwarves of Middle-earth count their descent from the Seven Fathers of the Dwarves, formed by the Vala Aulë and placed beneath the mountains of Middle-earth until the time came for them to awake (Ilúvatar would not allow the dwarves to wake before the elves, his Firstborn [1]). There are now seven great Houses among the dwarves, their rulers claiming descent from the first Fathers.

The most well-known of the dwarf-clans is that of the Longbeards. Most Player dwarves are assumed to be Longbeards by quest dialogues unless they are specifically a Stout-axe. Known also as Durin's Folk, the Longbeards are the House of Durin the Deathless, eldest Father of the Dwarves who, unlike the others, woke alone beneath Mount Gundabad in the Grey Mountains.[2] Most dwarves known from Tolkien's works are Longbeards- many in fact are of the line of Durin. Khazad-dûm, perhaps the most famous of the dwarf-mansions, was founded by Durin the Deathless, and was their pride until 1980 of the Third Age when the Longbeards' mining efforts awoke the Balrog sleeping there. The seat of the heir of Durin moved to Erebor for a time, and later to the Grey Mountains before dragons and their lesser kin drove Durin's Folk into exile.[3]

Thrór was King of the Longbeards after they were driven from the Lonely Mountain and established halls on the fringes of Dunland, at Zudrugund [65.6S, 8.5W] after a time spent wandering with those of their people who had not fled to the Iron Hills. Weary of exile, in 2790 T.A. Thrór passed such heirlooms as were left to him to his son Thráin, among them the last of the seven dwarf-rings, Angya (Handórm to the dwarves)[4] and traveled with only his old friend Nár to the East-gate of Moria, where he was slain and his body defiled by Azog, chieftain of the orcs that now occupied the ancient Longbeard city.[5] Thráin, after hearing this, summoned the other six Houses for a great war of vengeance on Azog and his folk, and from 2793-2799 of the Third Age the Haban'akkâ, the Reckoning-host, assaulted the orcs from Gundabad to the Gladden Fields. This became the Sixth War of Dwarves and Orcs and culminated in the Battle of Azanulbizar, incurring heavy losses for all seven Houses.

After Azanulbizar, when Azog was slain and Dáin Ironfoot declared that the reclamation of Moria was yet beyond them (Durin's Bane, the Balrog, still being there), Thráin and the other exiles of Erebor removed to the Blue Mountains where they settled at Thorin's Hall [13.8S, 103.2W] and dealt chiefly in iron instead of precious metals like gold or mithril. Thorin son of Thráin later led an expedition to reclaim Erebor from Smaug as is told in The Hobbit. Dáin Ironfoot ruled as King Under the Mountain afterwards, until the War of the Ring. His son King Thorin III Stonehelm succeeds him.

The Longbeards tell that Durin the Deathless will be reborn among them seven times. Durin VI, the last king of the name, was slain in Moria, giving the Balrog the name Durin's Bane. Prince Durin, son of King Thorin III Stonehelm, is one of the latest to bear the name.

The Longbeards have historically been close allies with the Narfanghoth and the Landorrim, though their relationship with the Zhélruka is far more strained, particularly regarding the various holdings in the Grey Mountains.

The Kámbrada, known also as Drása's Folk, woke and lived in Ered Cernin, relatively near the Zhélruka, with whom they fought. The Kámbrada were given the dwarf-ring Manthríf (also known as Sindya) by Sauron, and when they refused to return it to him he took it by force. Their home was destroyed and many of their people slain- and many others taken into Mordor as thralls. These became the Stout-axes.[6]

Taken into Mordor, the Kámbrada were forced into servitude and stripped of much of their identity. They took the name Khirvísa, the Stout-axes. By the time of the War of the Ring the Stout-axes were under the oversight of the Black Númenórean Zôreth in Lûghash. Their king, Váskmun Greytooth, was imprisoned in Barad-dûr and forced to wear Manthríf until he could no longer resist it. Once freed from the dungeons of the Dark ower, Váskmun sought Manthríf even to the point of leading his people into the Abyss of Mordath. Those who spoke against this course were driven out or killed. These, led by Spakorth, were given refuge in Erebor at Gimli's request while the rest of their people, taking now the name Firehorns, followed Váskmun into Mordath.

The Stout-axes learned to survive in Mordor, and though Glóin and the commanders of the Gabil'akkâ respect and appreciate their skills, they do not always appreciate the Stout-axes' less forthright methods. It remains to be seen how the remaining Kámbrada will react to their Stout-axe kin.

The Zhélruka woke in the east, near to the Kámbrada, with whom they fought over the resources of Ered Cernin. The end of the First Age was marked by widespread destruction across Middle-earth, and the Zhélruka's home was destroyed and they wandered. Durin II of Khazad-dûm told his people to make space for the displaced Zhélruka in Gundabad, but the Zhélruka vanished in the Grey Mountains and never arrived. One survivor came out of the mountains many years later, alone, with tales of Thafar-gathol, the Grey Citadel, a mansion he claimed the Zhélruka had delved in Ered Mithrin with mithril and wealth enough to rival Khazad-dûm, but despite centuries of searching, no one has found Thafar-gathol, Longbeard or Zhélruka. Future expeditions in the mountains may not have found Thafar-gathol, but they did find the remnants of a keep at Thikil-gundu, and though the Longbeards built it into the Steel Keep as it was at its height, the Zhélruka maintain that they have a claim to it, naming it Dómekh and quarreling with the Longbeards.[7]

Of the seven dwarf-rings, the Zhélruka were given Tínya, but the ring and the king at the time who bore it were devoured by the dragon Hrímil Frost-heart. The Zhélruka have a saying, "seeking the Citadel", to describe those lost to hopeless endeavours. They are distrustful of outsiders and not at all fond of the Longbeards, even if they have allied with them more than once, most recently during the Sixth War of Dwarves and Orcs and now as part of the Gabil'akkâ aiming to reclaim Gundabad. They have also an old enmity with the Kámbrada, and many have little but scorn for the Stout-axes. The Zhélruka are partial to the sword, instead of the axe favoured by many other dwarves.

The Zhélruka used a different runic mode than the Longbeards and other western dwarves. While the Longbeards use primarily an alphabet developed by the elves, the Zhélruka developed their own. Some of this is shown on Rói's Cipher-stone and Rói's Edda-stone.

Ótek VII is king of the Zhélruka following the War of the Ring, succeeding his father Vékun.

The Narfanghoth (Sindarin for Firebeards) woke in Ered Luin near to the Landorrim.[8] Their mansions of old, in the First Age, would have been at Belegost and/or Nogrod, and after their destruction many of the Narfanghoth relocated to Khazad-dûm.[3]

The Narfanghoth have long been allies to the Longbeards, and during the Sixth War of Dwarves and Orcs they were the first of the other Houses to rally to the banner of Thráin under the leadership of Drogar Bloodwhisker.[9] The old alliances are strong enough that King Thorin III will call on the Firebeards again as the Gabil'akkâ prepares its next assault on Gundabad. The dwarf-ring of the Narfanghoth would have been either Úrya or Vanya, the two rings that drew the attention of an ancient worm hiding beneath the Blue Mountain after the War of Wrath. The other would have gone to the Landorrim.[4]

The Landorrim like the Narfanghoth woke in the Blue Mountains and would have dwelt in the ancient dwarf-cities of Belegost or Nogrod in the First Age.[8] Old allies of the Longbeards, they were also quick to join Thráin's Reckoning-host for the Sixth War of Dwarves and Orcs. Agni the Wild led them to war, and after the Battle of Azanulbizar he was succeeded by his son Onúr.[9]

The dwarf-ring of the Landorrim would have been either Vanya or Úrya, the other going to the Narfanghoth. The rings and the great wealth grown from them drew the notice of Fingar the Greedy, drawn from the depths of the Blue Mountains to devour the rings.[4]

The Abnúzhu dwelt in Ered Cernin when Thráin of the Longbeards called for a war of vengeance against Azog and his folk, and for the first time since before the fall of Khazad-dûm the Abnúzhu dealt with the Longbeards. They were led by Shâlim Nightcloak into the Battle of Azanulbizar were they, like the other Houses, took heavy losses.[9]

The Temámir were considered by some to be the wisest of the Seven Houses. They were led into the Sixth War of Dwarves and Orcs by King Brítu the Redeful, but after six years of fighting and heavy casualties, the princess Jegín was the last of her line remaining, and she was king of her people through the end of the war.[9] 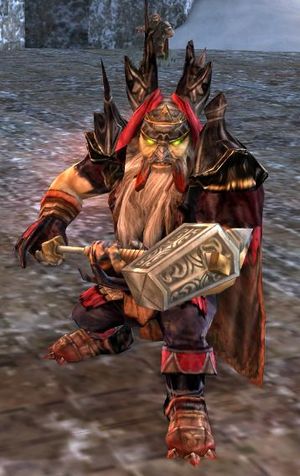 Though the Longbeards settled halls of their own in Ered Luin, the Narfanghoth and the Landorrim had their origins here first, and it's not clear to which the Dourhands belonged, if either. The Dourhands, led by their king Skorgrím Dourhand, sacked the elven refuge of Edhelion around the year 2400 of the Third Age, approximately six hundred years before most of the story of Lotro and four hundred before the founding of Thorin's Hall[10][3]. Ancient dwarf-cities in the First Age, Belegost and Nogrod, were also settled in the Blue Mountains, though they were both laid waste during the War of Wrath that ended the First Age, most of the survivors fleeing to Khazad-dûm.[3] The Dourhands by the end of the Third Age followed Gormr Doursmith, who had become the steward of Thorin's Hall when Thorin and Company departed to reclaim Erebor, and after his death the reanimated body of the long-dead Skorgrím, walking again at the whims of Ivar the Blood-hand.