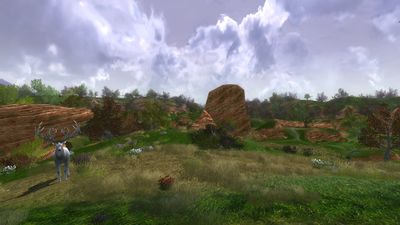 The Gloomglens is an area in Enedwaith. The North-south road runs north from Dunland through Enedwaith and into the Windfells, where it turns somewhat westward into the area, passing through the King’s Way Gate (currently watched by the Draig-lûth). South-west of the road lies the bulk of the Gloomglens, a stony canyon of bluffs, plateaus, and craggy valleys.The Grey Company traveled through the area on their journey south.

In the most western part of the area a small hobbit-village can be found called Maur Tulhau.

The Ranger Idhrenfair and his companions Himeinior and Prestadír, until recently companions of the Malledhrim in Southern Mirkwood, seek for a more secret way through Enedwaith into Dunland. Rumour has it that long ago a tribe of hobbits of the Stoor family settled in this area, but when the Great Plague swept through the lands, they were wiped out. Nevertheless, the Rangers report seeing strange things in that land, including glimpses from a distance of a strange people. . . .

The Gloomglens are inhabited mainly by wolves and boars – watch where you step, for signs of them are everywhere – but the Rangers have also seen majestic stags, shining white in the forest gloom. There is something unnatural about these creatures, and they hesitate to hunt them.