Gabilazan is a landmark within Giant Halls, in the Misty Mountains. [28.0S, 0.8E]

This old fortress sits athwart a narrow passage from the Giant Halls to its northern entrance in High Crag. [26.9S, 0.3W]

It was overrun and then abandoned by goblins long ago, but has since come under control of the Dourhands, to make quite the unexpected alliance with giants. Scouts recently reported that Skorgrím Dourhand is now their leader, made un-dead in the Silver Deep and arrived to Gabilazan not long ago.

In the northern section of the fortress is the Gabilazan Vault, where the first stone of the fortress was laid. On a hill in the southern section lies Halmur Stoneshaper's Tomb, a place shunned by the Dourhands. And in the middle, to the east, lies a fortified section where Skorgrím is hiding together with "the missing rider", a Nazgûl. During a quest instance defenders of the Free Peoples are allowed to this section, guided by Gimli.

Note: While the landmark flag is found within the Giant Halls, most of Gabilazan lies within High Crag, including both the vault and the tomb. 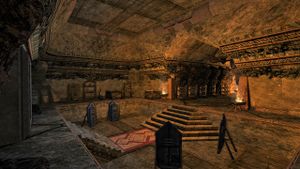 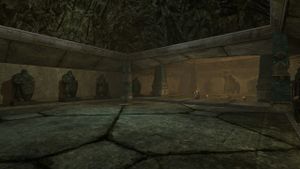 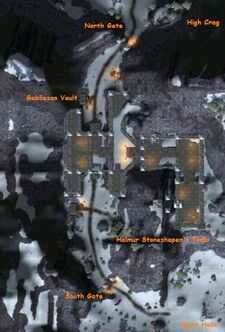 These deeds can be advanced by exploring Gabilazan:

Gabilazan was one of the two fortresses built by Durin's Folk in the northern reaches of the Misty Mountains, beneath which stretched extensive mines. Alas, these settlements were always challenged by the goblins which infested the range. After the fall of Helegrod to the north to a marauding Dragon and its spawn, Gabilazan was eventually isolated, besieged and overrun by goblins during the waning rule of the Longbeards.

These days the goblins have abandoned the fortress to ruin and in their stead an odd alliance of giants and the traitorous Dourhands have made it their home. — Deed

South of the High Crag tumbles a land of giants, from trolls and mammoths to proper rock-throwing, Man-squashing folk from the Giant-halls of Iorbar in the far south. However, an old Dwarf-fort called Gabilazan guards the western pass. Now controlled by the wicked Dourhand family of Dwarves, Gabilazan has become a vital hinge in Angmar’s plans for the Misty Mountains. It is here that the Dourhands conspire with giants against the Free Peoples of Eriador below.