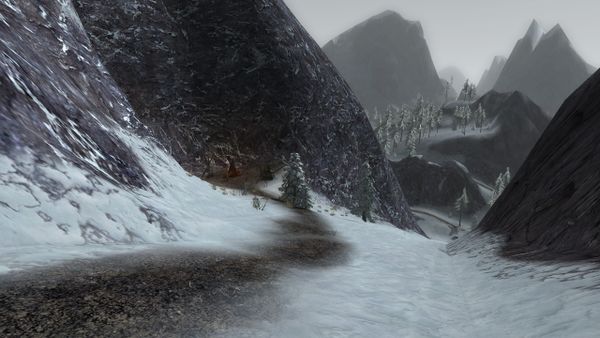 Whitcleft is a landmark within Bruinen Source East, in the Misty Mountains. [23.4S, 0.2E]

This very narrow cleft runs between the western and eastern Bruinen Source. Halfway up the steep trail is a small encampment, at a levelled pocket in the mountain face, now occupied by a handful of goblins.

These deeds can be advanced by travelling Whitcleft:

The difficult yet unassuming pass of Whitcleft turned out to be the downfall of one of the larger dwarf-realms within the northern reaches of the Misty Mountains. Believing that the goblins to the north would resolutely struggle to find or dig secret tunnels into their well-defended mines to attack, the dwarves to the south neglected the defence of this pass.

A particularly cunning goblin chieftain led a horde of his people through the pass of Whitcleft in the deep of winter, forcing them to dig their way through at a terrible cost in lives -- but using this approach he came upon the dwarves from the surface unexpectedly and trapped them underground through the long months that followed, driving most to their death through starvation or futile attempts to escape the siege.

So many goblins froze during the siege that they too were decimated by it, but Durin's Folk were never able to return to their lost stronghold. — Deed