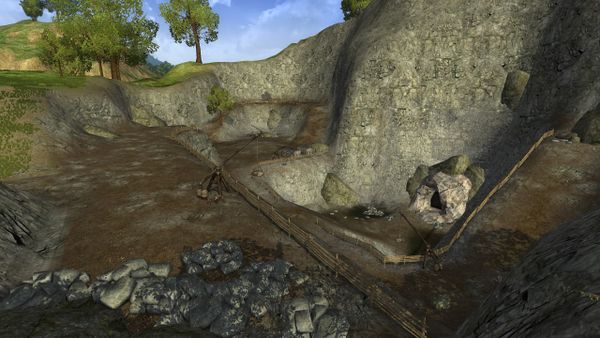 To the east of Scary lies a small quarry that once used to be important. For ages it was used by Hobbits from throughout the northern and eastern regions of the Shire for a variety of building projects, until better and cheaper stone arrived from west. Even worse, recently miners broke through a hidden chamber in the quarry and released a swarm of spiders that have taken over the quarry and its cave system. 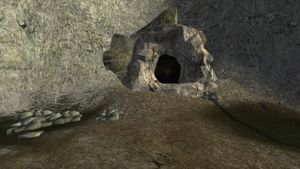 Entrance of the quarry

These deeds can be advanced by visiting the Quarry:

"For a long time, dwarves were not seen with much frequency in the Shire and bringing stone from far abroad was expensive, so the hobbits constructed their own quarry to supply the needs of builders and masons.

"Recently, however, better quality stone has been available from the west, so the quarry has fallen into disuse and has become infested with dangerous vermin." — Deed text

"Great stores of goods and food, and beer, were found that had been hidden away by the ruffians in sheds and barns and deserted holes, and especially in the tunnels at Michel Delving and in the old quarries at Scary; so that there was a great deal better cheer that Yule than anyone had hoped for." — The Return of the King, by Tolkien

It is said that the quarriers at times happen upon rare and wonderful artefacts in their digging, although where these treasures originated remains a mystery to all who hear the tale. — lorebook

Map of the Scary Quarry (entry to the right)