The Lost Ring-lore of Eregion 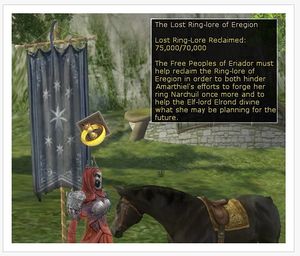 Status of the server wide challenge.

This was a server-wide quest associated with the Release of the Mines of Moria Expansion. It went live with the release in July of 2008, of Volume 1, Book 14: The Ring-forges of Eregion. The successful acquisition of 70,000 pieces of Ring-lore was required to open Book 14, Chapters 7 of the Epic Quest and beyond. Completing the event also unlocked The Battle for Aughaire instance cluster.[1][2][3][4][5]

The remnant of this event is the deed Ring-lore of Eregion.

Amarthiel seeks to reforge Narchuil, the ring of iron she forged long ago under the tutelage of the Dark Lord Sauron. In an effort to stop her, Elrond Halfelven of Rivendell has dispatched Heralds of Rivendell throughout Eriador, seeking the last vestiges of the Ring-lore of Eregion. These Heralds have been charged to enlist the help of people of good courage to help in this endeavour, and reward them for their efforts. Once enough fragments of lore have been gathered, Elrond may learn a way to hinder the Champion of Angmar and put an end to Narchuil’s threat once and for all.

During the event, players could encounter Amarthiel, controlled by a GM, roaming Middle Earth[6]. While she would heavily mitigate damage and was seen as all but invincible, the Heralds of Angmar who accompanied her could be defeated, dropping barter items which could be traded to Ráthulf in Esteldin for cosmetic items.