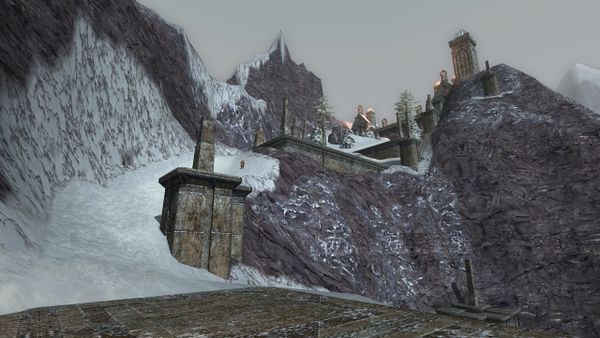 The Bitter Stair is a landmark within Bruinen Source North, in the Misty Mountains. [17.9S, 2.2W]

Furthest in the north-western reaches of the Misty Mountains, these grand stairs remind visitors of a bitter fight fought against the dragon Thorog long ago. Now Corcur hill-men guard its zigzagging steps in the steep hillside to the entrance of Helegrod, a raid instance for 12-24 persons from level 50+.

The Bitter Stair is a treacherous switchback that leads to the gate of the dwarf-fortress of Helegrod – once the largest of the holdings of Durin's Folk in this region of Middle-earth, until in the Second Age it was sacked by the dragon Thorog and his brood, who claimed Helegrod as his lair.

Some years later, a force of dwarves led by a great hero fought their way up these stairs to the fortress. Many of their number were flung to their deaths below by the drakes which defended the approach, but in the end the hero fought his way into the fortress and did indeed slay Thorog.

Alas, so many Dwarves were lost in the battle that they were forced to abandon it to the dragon’s brood, and they have never returned thence. — Deed