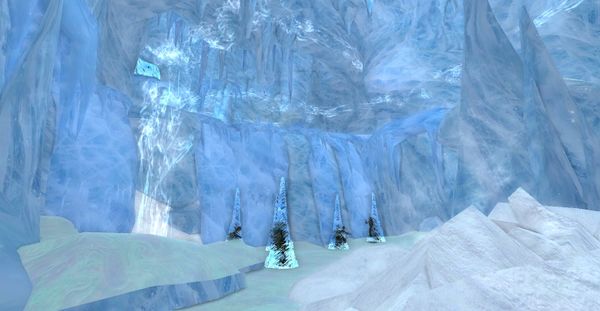 "An evil presence has descended upon the Ice Bay of Forochel, inhabiting a large glacial iceberg. Having sent several hunters to defeat the evil, the Lossoth have asked you to help them destroy this evil once and for all...."

Sâri-surma is the largest iceberg in the Ice Bay. Apparently Drugoth the Death-monger was driven out of the Misty Mountains and was relocated to this icy location, where he has built himself a citadel from which he schemes against the southern lands of Arthedain.

This instance is also known as the "Glacier Fortress" and it provides In Their Absence quests.

This is a scaled instance, designed for a Fellowship (6 characters) from level 65 and up.
It is available in the Instance Finder. 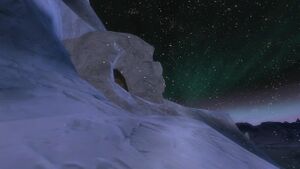 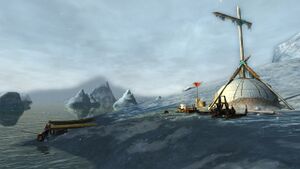 Most creatures and bosses are more susceptible to fire than other types. Be sure to bring ample wound and fear pots for this instance.

There are steam vents spread throughout the instance that will apply a 1-hour Warding Warmth buff that protects from some minor frost effects if standing within their Invigorating Warmth for 10 seconds.

Three types of mobs lie in wait on the way to Coldbear the Wight:

Drugoth has resurrected Coldbear as a wight. This fight takes place in three phases – two phases fighting Coldbear the Wight and one fighting the Ghost of Coldbear.

When a character approaches, Coldbear will begin to talk and a gate will rise behind the character while another gate will rise across the room to the right. The fight resets if Coldbear reaches the entrance gate. Take note of the four groups of wights around the room.

The first phase introduces Retaliation, a buff he applies to himself which reflects 90% of all damage directed toward him for 10 seconds so make sure all characters stop attacking during this time. He puts up this shield at the beginning of the first two phases and in roughly 30 second intervals.

Coldbear also applies a heavy non-removable wound effect after saying, "Let the frost embrace you", which upon expiration does heavy damage to nearby fellows. The healer and possibly a back-up should focus on healing the afflicted fellows, while moving into a safe zone away from the rest of the fellowship. With practice, a Rune-keeper may be able to time his Do Not Fall to Winter skill to prevent this DoT.

Coldbear will also apply other minor effects such as Coldbear's Revenge (reducing Block, Evade and Parry to zero), Coldbear's Dish (reducing movement speed by 75%), and a frost wound DoT.

After Coldbear the Wight has been defeated, his spirit is released and the battle quickly continues. The Ghost of Coldbear uses many of the same attacks as before along with new attacks. However, from now on he will not use Retaliation, his damage-reflecting shield.

In this phase, Frozen Wights around the room will activate if characters get too close and apply Covered in Wight to those they touch which reduces healing, ranged and tactical damage to zero, and adds 300% melee damage and heavily damages others nearby upon expiration. A skilled melee attacker such as a Champion may be able to intentionally activate the wights for the extra damage, while making sure to move away from the group as the effect expires.

In addition, the Ghost of Coldbear has a few new attacks. When he says, "I need more power, <name>!" he charges that character and steals its power. Coldbear can also use an attack which will stun all characters nearby him. Occasionally he will make the room shake for one minute applying a minor frost DoT on everyone.

Before reaching Osan, there are 4 patrolling mobs and 2 static mobs to clear.

Osan is the second of Drugoth's lieutenants and must be defeated before facing Drugoth the Death-monger himself.

To start the fight, activate the pedestal in the middle of the pit and Osan will walk up and smash it. Characters must not stand too close or they'll get a nasty bleed for one minute.

During the fight, Osan will summon waves of adds. At spaced intervals, elite Legionnaires and Fanatics will spawn, one at a time. At greater intervals, the named Captains will drop in. Osan will also summon wights to aid him with different buffs, up to 4 total:

For each add that the group defeats, Osan adds one tier to his revenge meter. When the meter reaches tier 5, Osan will say "Now you will all die!" and raise his arms above his head for about 3 seconds. He will then pound the ground 3-4 times, causing 1 - 6 k frost damage per hit. Osan may delay this attack for a short time after the revenge meter hits tier 5.

Occasionally, one character will get a blue eye above his head. To get rid of it, someone must remove the corruption on Osan. If not removed, 15 seconds later it will expire and remove 100% of morale from that character (which equals defeated).

To progress in the tier II challenge, all four of Osan's Captains must be defeated before Osan falls. When a Captain is defeated, Osan will be able to use that captain's ability at will.

Drugoth is the final boss.

Drugoth the Death-monger begins with knock-back skills so characters do better stand inside of him so they won't fly off the edge. It is possible to avoid the knock back by moving away from him when he gives his cue. To be safe, characters always keep their back to the door or to the left side of the platform – that side is twice as long as the right side.

For the second part, Drugoth will cast AoE frost effects, so when he says anything about hiding, the Fellowship should hide behind one of the stone pillars.

In the final stretch, Drugoth will summon a spirit (two spirits on T2) that stuns a single party member and transfers the stunned member's abilities to him; defeat the spirit quickly to clear the stun and skill transfer. (For instance, Burglar spirits will riddle, Captain spirits will cast a fear, and Guardian spirits will cast a reflect 90% damage buff.) For his other attacks, hide behind a stone until he is finished.

If successful in defeating all of Osan's Captains, the Caeryg will enter combat when the Fellowship engage Drugoth the Death-monger. They can apply a removable poison DoT, do melee frost damage, and knock-back. Drugoth will never move from his original spot, but he has a nasty ranged attack he will use if any characters are out of melee range.

The Tier 2 Challenge requires keeping both Caeryg alive for the Challenge.

If not dealt with quickly, the Caeryg will attack the tank or healer, potentially knocking them off the edge, causing a wipe. There are a couple ways to deal with them to ensure a successful win. Periodically, the Caeryg will do a knock-back on their target if they are within melee range, or a pull if their target is out of melee range. It is better to be on the opposite side of the area and have them pull characters toward them so they are not knocked off of the edge.