This page is about raid. For the landmark in Imlad Morgul, see The Remmorchant. For the deed, see Remmorchant, the Net of Darkness.

This 12 person raid is part of the Minas Morgul Instance Cluster. It was released in Update 25.4.

"Far beneath the Ephel Dúath, in the deepest caverns of Torech Ungol, lies the Remmorchant, the Net of Darkness. There, wreathed in webs of shadow only the Light of Eärendil might hope to penetrate, lies the lair of Ungwetári, last child of Ungoliant."

It is available in the Instance Finder after completing Discovery: Remmorchant - the Net of Darkness. You will need to have started or completed the quest Into the Spider's Den to access Torech Ungol.

Estimated completion time is between 2 - 4 hours.

These mobs are encountered within Remmorchant:

Note that the sidebosses are unlocked after defeating boss 1, Bratha Tasakh, Lady of Many Venoms.

Note: there may be mistakes in the following. Please correct.

Bratha Tasakh goes through 2 phases, out of acid, lightning and fire, which vary each week in a 6 week cycle.

Just tank and spank boss. Occasionally, a random player will get an "arc lightning" debuff which will envelop their character in a blue bubble aura. Players who get this debuff must immediately run away from groupmates as it is stacking and contagious and will cause damage to all affected. This is the easiest of all three phases.

Every so often, the boss will give players a "cascading heat" debuff that tiers up. This may be healed by the healer at low tiers, but once it reaches high tiers, it will be impossible to heal. To get rid of the "cascading heat" debuff, players must stand next to the random teammate who gets the "smolder" debuff, the smolder debuff looks like a candle icon. Because of this, ideally all players must stand on once spot, preferably in melee range of the boss. The boss does no AOE damage so it is safe for ranged players to stand in melee range.

The trickiest part of the fire phase is that once in a while, a random player will get a "combustion" debuff. The player who gets "combustion" must immediately run away from the group (ideally towards the entrance), because when it expires, it will drop a burning puddle that causes damage and throws any player caught in it in the direction they are facing. It is very important to run away from the group when you get the "combustion" debuff as this may bounce teammates into incoming spiderling adds, killing them, or simply kill them with the damage that the dropped puddle causes.

Upon starting the boss fight, a random player may die instantly. Not sure how to avoid the random 1-shot.

A large daughter gredbyg miniboss will then spawn to the left of the boss, making the mother taking no damage.

When daughter comes near to mother, daughter gets a buff, so keep it away from the mother.

Flying winged gredbyg adds will come, as well as beetles that may explode and kill group members caught in the blast. There are many tactics to this boss fight, some do it with 1 tank, some do it with 2, with the off-tank kiting the beetles. If the main boss is not DPSed fast enough, a 2nd daughter will spawn to its right, making life very difficult. Step out of acid pools.

Kill Uruk-hai boss Zabothak. Every so often he will do a spinning "rend" AOE attack that may kill people in melee range if not debuffed by a burglar or LM. This may cause a "Rend" bleed on all who are hit, which must be cleared immediately. The boss says "Bleed by Morgul Steel!" before he does the rend attack. Ocassionally, the boss will also say "You weaklings cannot defeat ME!" or "Show me your strength! HA HA!" and put up spinning shields which reflect damage. All DPS must stop when he puts up shields, or DPSers may end up killing themselves. Bleeds/DOTs on the boss will reflect on DPSers. The boss putting up shields may be avoided by a burglar who does conjunctions just as the boss says the thing he says before he puts up shields.

Ads will come in periodically, Bloodless Warriors. If killed, Zabothak will get a +20% damage debuff. Plan out the cc.

Rukhor arrives. Players will destroy large squirming cocoons containing either the fell beast, troll and then Sûlok*. The Sûlok has an induction attack that may 1-shot kill players caught in its AOE, so it must be DPSed fast before it is able to do this attack. Afterwards, players must destroy cocoons which drop puddles which give debuffs called "necrotic ooze". Players must refresh the green necrotic ooze debuff on them at all times by stepping in the puddle dropped by a destroyed cocoon, because if the boss finishes inducting and a player does not have the green necrotic ooze debuff, he will heal. The necrotic ooze debuff must be refreshed by stepping out and then back in the puddle because it will not refresh on a player already standing in a cocoon puddle. These puddles will eventually expire, so players must move on to the next cocoon and pop it to drop new necrotic ooze debuff puddles. This is a DPS race, because eventually the raid will run out of cocoons to pop and create puddles from.

Tank and spank Shelob. Once in a while, she will encase a random player within a web cocoon and the player will not be able to do anything, so teammates must destroy the cocoon around the player ASAP. Once in a while, a player will also get a poison debuff. The player must then move away from the group as he/she will drop webs on the ground that slow (and damage?) when the debuff expires. At a certain point, there will be a phial of light on the floor of the map, and the player who picks it up may use it to cause Shelob to be knocked down and become vulnerable (during which the team must DPS hard). The phial may be used every (1 min 30 secs?) If the player holding the phial dies, the phial will drop on the ground and another player may pick it up. At a certain point, Shelob will move into the ceiling and "Spawner" spiders will appear on the map. The team must immediately search for the spawners and kill them as they will summon adds. There will be 4 spawners. After the 4th spawner is killed, Shelob will once again drop onto the floor, and the tanking and spanking resumes. She will then go back into the ceiling at a certain point, and the spawner cycle begins again. Rinse, repeat until Shelob is defeated.

Do not remove poison. Every so often the boss will disappear and the entire group will be covered by a sticky web. Destroy the web ASAP, and the boss will return. Rinse, repeat.

Do not remove poison. Decide on a point to stand on and all stand there except for tank. Do not move.

Remove poison ASAP. If you get a yellow eye above your head, move away from group.

When the group reaches Boss 3, people who join the raid or die and respawn at the entrance may type "/stuck" to teleport right next to the boss room. The same may be done for boss 4.

Ornate Heritage Rune of Lore for each character plus a lower chance of a random item from the sets below. For the side-bosses the set selection is random and not dependent on the character's class. The chests reset three times per week:

Ornate Heritage Rune of Lore for each character plus a lower chance of a random item from the tier 2+ raid gear sets below. For the side-bosses the set selection is random and not dependent on the character's class. The chests reset once per week on Thursday at 3:00 a.m. server time.

Ornate Heritage Rune of Lore for each character plus a lower chance of a random item from the tier 2+ raid gear sets below. For the side-bosses the set selection is random and not dependent on the character's class. The chests reset once per week on Thursday at 3:00 a.m. server time. 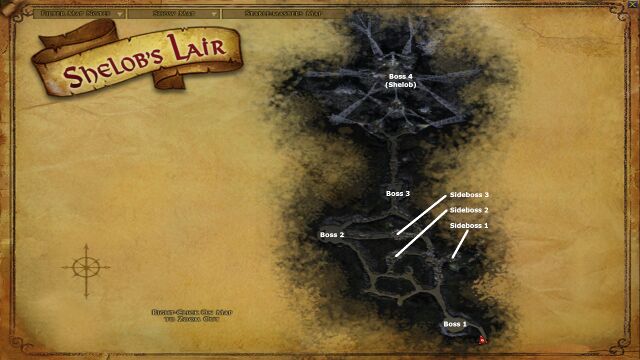