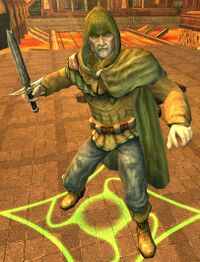 Golodir is an experienced captain of the Rangers of the North, considered great by those who met him. However, years ago he defied Aragorn's command and brought a company north, into Angmar, and since then not a word has been heard, neither of him or his company. Until recently...

The other day, a falcon from Esteldín arrived to Aragorn, bearing a message that at least one member of Golodir's company is still alive, at Aughaire. Those tales are told in Book 6, how the east of Angmar became unreachable and Golodir and his army may be alive, or not, somewhere behind the malicious powers of the stones. Continuing in Book 7 many of Golodir's company is found at the hidden cave named Gath Forthnír, and among them his daughter, Lorniel. However, Golodir himself is not yet found; his fate is revealed throughout the epic storyline, covering several books. Eventually Golodir once again serves his chieftain, Aragorn, and will do so at yet other locations.

Golodir is first met somewhere within Carn Dûm where he is held prisoner, being rescued at the cost of his daughter's life. From there he is brought to his room within Gath Forthnír in Angmar.

Within Gath Forthnír he applies +2 Dread to visitors, until completion of Volume I, Book 8, Chapter 4: A Beacon of Hope.

"Thank you for bringing me back to the realm of the living, <name>. My grief is not now so terrible."
"Mordirith has been defeated, but only for a time. Still, it is a reprieve."
"Whatever aid I can lend to you, I will, <name>."
"It is a strange fate, both Laerdan and I losing daughters to Angmar."

Later Golodir has travelled to and is temporarily found near Elrond's Stables in Rivendell, as the Grey Company prepares to move south.

"This refuge has not changed in the many years since I last came here, but surely I, myself, must be unrecognizable. So much has happened, and so little of it good. But the ride here was a marvel, and I could feel the weight of the past falling from my shoulders with the feel of the breeze upon my face. Legimbod delighted in the speed, and I delighted with him! The southward journey will do both of us some good. I am ready to be off again."

Later on, Golodir has journeyed to Tûr Morva in Dunland, together with the Grey Company. Somewhat after this time Golodir also appears in a dream, where he is found at the shores of Lake Evendim.

"There are matters still left undone here. The cowards who slink in the caves beneath Tâl Methedras still live, <name>. They spoke to us as friends, gave us shelter, took the sweat from our brows, and repaid us with treachery. I will replay them in kind. My lost brethren and my lost friends demand this of me."

After the Battle of Helm's Deep, the Grey Company reunites with Aragorn and Golodir travels with them to Isengard to free Lothrandir.

"If Lothrandir is down here, we will find him, <name>. This pit has seen better days, but it will see worse still if our friend has come to harm. What few of Saruman's lackeys still lurk in the depths no longer carry out his will. They seem to be busy scavenging for treasure and fighting among themselves o'er it. Fools!"

Travelling through the Paths of the Dead and Western Gondor with Aragorn and the Grey Company, Golodir can later be found in the port-city of Pelargir in Lebennin. [84.7S, 34.8W]
Afterwards, he takes part in the Battle of Pelennor Fields.

"Yes? What do you want? Are you here to chastise me for treating Corunir unkindly? He has been a sharp thorn for these past few days, constantly asking questions about my well-being. He should have expected a rebuke!"