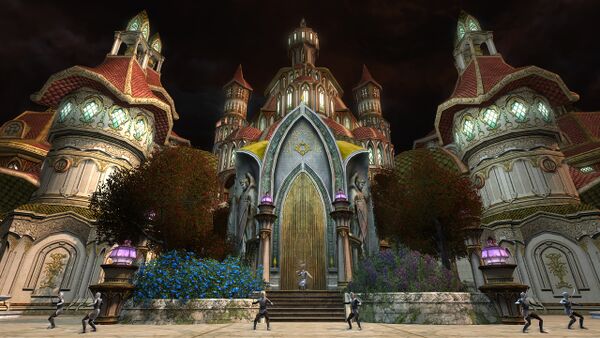 Doom of Caras Gelebren is a level 20-140 skirmish set in the Second Age at Caras Gelebren, in Swanfleet. Skirmishes can be started by using the Instance Finder. Requires Before the Shadow.

Determined to possess the Great Rings of Power, Sauron made war upon the Elves and led his vast armies to Eregion to lay waste to Caras Gelebren.

For all recorded variants of mobs found within the instance, see Category:Doom of Caras Gelebren Mobs.

Any 2 of these Encounters per skirmish:

Doom of Caras Gelebren is a defensive skirmish with four stages to defend. As you are forced to pull back deeper into the city, a blanket of +5 Dread will close around the House of the Mírdain. Be wary of straying too far from the NPC Mírdain at each point.

The first assault is against a watchtower on a lower level of the city. Enemies can come from either downhill to the north or south.

The second assault comes against the gate uphill from the watchtower. Follow Faeldor to this point.

For the third assault, withdraw to just inside the gate. Attacks can come either against the northern gate (where the second assault was) or the southern, a short distance through the gardens. Watch for messages announcing which gate the enemy is marching against in solo, or split your party as evenly as you can between the two in larger groups. 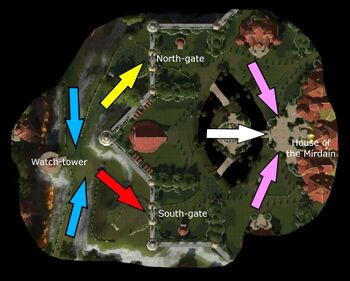 Simple boss fight against one of three possible bosses: