Introduced with Before the Shadow, Delvings are a way to optionally increase the difficulty of certain Missions in order to earn rewards and gear roughly equivalent to Tier 3 raids. Delvings can be run with one or two people, the same as regular missions, and are currently only available to characters at their server's Level Cap. Access to the missions that have Delvings enabled requires purchase of Before the Shadow.

A letter will be sent with a strange gem attached. This gem will start a quest that directs you to a mission-giver. Any of the mission-givers in Swanfleet or Cardolan advance this quest. You will be given a

Delving Zircon, used to change the difficulty of a Delving to tier 1. 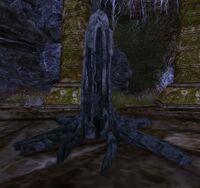 There are ten tiers of Delvings available, each more difficult than the last. To activate a Delving in a mission, locate the Delving Stone near the entrance to the mission and interact with it. Choose the quest that corresponds to your desired Delving tier and accept it. Ten of these quests can be completed each day. Once you have accepted the quest, interact with the Delving Stone again to place the correct Delving gem in the stone and activate the Delving. Complete the mission as normal, and do not leave the instance until you have located the Scout and the Delving quest has advanced to Objective 4: Speak with the mission giver. Leaving the instance at any point before this will fail the Delving quest and reset the mission to base difficulty.

Successfully completing and turning in a Delving quest will reward a Delving gem to start the next tier. Leaving the instance early will leave you with a cracked version of the gem that can be bartered with a Delving Quartermaster for an undamaged gem so you can try again.

Malices are various buffs and extra mechanics present in Delvings. There will be a maximum of five malices present in any given Delving. There are different sets of malices that rotate weekly on Thursday at 3:00 a.m. server time, denoted with numbers.

For the following effects the Malice is yet unknown:

Delving Writs and chests of random rewards. Delving Writs can be used in barters with the Delving Quartermaster. Delving chests have a chance to drop bundles of crafting materials, equipment that can be worn or disenchanted, character boosts, and more. Higher tier chests are more likely to drop better rewards. There are also several deeds that reward titles, Delving Writs, and Virtue Experience.