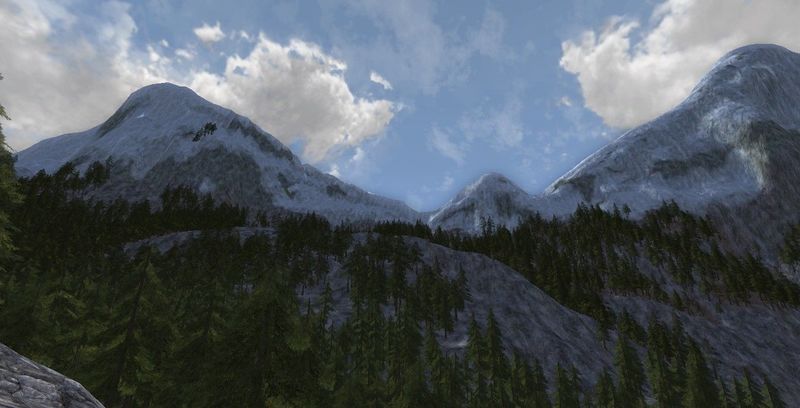 The snow-capped peaks that separated Gondor from Rohan

Named for their everlasting snow covered peaks, the White Mountains, also called Ered Nimrais in Sindarin, are an important mountain range in the southwest of the known parts of Middle-earth.

In the latter part of the Third Age, they formed the border between Gondor in the south and Rohan in the north. They range from Mount Mindolluin above Minas Tirith in the east, to the peaks of Tryhirne in the north west, near the valley of Helm's Deep. The Gap of Rohan separates this northern spur from the Misty Mountains. A lower spur, separated south of the Tryhirne, runs towards the coast of Andrast. The total length of this range is over 900 km.

The mountain range and the near forests are the ancient home of the mysterious Druadan. The Oathbreakers have lived beneath Dwimorberg, the Haunted Mountain, through the Dark Door and into the Paths of the Dead under this mountain range since they were cursed by Isildur. On the southern side, various cities and fortresses of Gondor mark the landscape, some ruins and some still inhabited. The White Mountains are also the location of the beacons of Gondor.

In LOTRO, this range is not a separate area such as the Misty Mountains, but the White Mountains are an important part of the landscape between Rohan and Gondor. The foothills of the northern side of the range can be accessed in West Rohan. Also, multiple iconic locations such as the Dunharrow field and the valley of Helm's Deep are open for exploration and questing. On the southern side, the White Mountains enfold the Blackroot Vale, featuring iconic locations such as the Stone of Erech, all the way down to the coast of Belfalas and the city of Dol Amroth. When traversing from West Rohan to Western Gondor, the White Mountains can be passed through the Paths of the Dead which lie underneath.

With Update 18 you can visit the north side of the White Mountains as you journey eastward with the Rohirrim from Eastfold through Far Anórien enroute to the Battle of Pelennor Fields. As you travel, you pass the northern Warning Beacons of Gondor from Halifirien to Amon Dîn.

Dunharrow and the high peak of the Haunted Mountain

Blackroot Vale on the southern side of the mountains

The White Mountains were presumably made by the Vala Aulë when he helped in the construction of Arda. It is also possible that the were created by Melkor, and served the same goal as the Misty Mountains, which was to stop the Valar from riding around freely in the lands of Middle-Earth.

The White Mountains are characterised by their high, perpetually snow-capped peaks. A few of these peaks, from east to west:

The Tryhirne looming above Helm's Deep

These peaks lie to the south of the Great West Road in Anórien.

Several rivers originate in the White Mountains. These rivers are:
On the north side:

On the south side:

Men under the Mountain

In the second age, Wild men inhabited the valleys of the mountains. They had been servants of Sauron but swore allegiance to Isildur. After failing to turn up, Isildur cursed them, and, known as the Oathbreakers, they haunt the Paths of the Dead ever since. They are now known as the Men under the Mountain. On the northern end, their home can be accessed via the Dimholt. On the southern end, the Paths of the Dead end up near the Stone of Erech.

After arriving from Numenor and establishing the kingdoms of Gondor and Arnor, the entire mountain range fell under Gondorian reign.
Beset by orcs at the Field of Celebrant but saved by Eorl and his Rohirrim, the Gondorians granted the fields of Calenardhon to their saviours, who settled there and named it Rohan. The Gondorians still ruled the southern valleys of the mountain. Many local lords are loyal fiefs of Gondor.

After the Battle at the Field of Celebrant, the Rohirrim settled in their new kingdom of Rohan. Their rule was challenged by the Dunlending who claimed the land was theirs, which resulted in many battles and tensions between their peoples. The Rohirrim established their capital Edoras on a foothill of the White Mountains, and their stronghold of Helm's Deep in a valley at the north-western end of the mountain range.

The Drúedain, a mysterious group of small people, lived in the mountains. It is said they had a large colony on the southwestern range, near Andrast. These peoples made the Púkel-men at the stairs of Dunharrow. Later, they resettled in a forest near Minas Tirith, along the northern slopes of the White Mountains.

Dwarves of the White Mountains

You are from the south-western halls of Ered Nimrais, the White Mountains in the south bordering the lands of Andrast. Though your kingdom lies far from the central mountains where Men once dwelt, the rumour of the Oathbreakers has given your realm an ill name.

During Volume III book 2, the player encounters the Dwarf Fúni Gemcutter, who mentions his home city Zigil-jâbal in the White Mountains.

During Volume III book 2 and book 3, the player will encounter an old Dwarf, Nar, who has lived in the White Mountains before coming to Zudrugund in Enedwaith. He travelled with the company of Thror and Thráin after they abandoned the Lonely Mountain. Conversations with Nar as well as some of the books in the library of Zudrugund hint that two dwarven cities, Zigil-jâbal and Kechel, exist somewhere in the White Mountains. During a quest in the Gap of Rohan the dwarf Ondor also mentions the city of Zigil-jâbal, but neither can be visited in the game yet. [1]

Dwarven settlements in the Fourth Age

During the Battle of Helm's Deep, Gimli the Dwarf was awe-struck by the riches of the Glittering Caves (Aglarond). It is said that after the events of the battle against Sauron, in the early Fourth Age, Gimli will lead a colony of Dwarves and settle there.

Orcs have lived in the White Mountains for a long period, troubling Rohirrim and Gondorians

The northern line of the warning beacons of Gondor

Two lines of beacons eminate from Minas Tirith. The northern beacons run along the Great West Road on the northern slopes of the White Mountains.

From nearest to Minas Tirith to nearest to Rohan, these are Amon Dîn, Eilenach, Nardol, Erelas, Min-Rimmon, Calenhad, and Halifirien (or Amon Anwar). This has been estimated to be a distance of roughly 150 miles.

In the Trilogy, the call for aid from Gondor to Rohan is described as the delivery of the Red-Arrow to Théoden in Dunharrow where the Rohirrim were already mustered. The Trilogy does mention the southern beacons being lit to Belfalas.

The delivery of this War-arrow signaled to Aragorn it was time to leave on his errand while Théoden King led the Rohirrim to the aid of Minas Tirith.

The southern beacons run from Minas Tirith to the Havens of Belfalas, Lamedon, and Dol Amroth in Western Gondor.

The Southern Line of Beacons

As the LOTRO story line progresses into Western Gondor, we are following Aragorn's passage through the Paths of the Dead.
At this time in the trillogy, all of the southern beacons (those in Western Gondor) are lit and the Red-Arrow has been delivered to Théoden in Dunharrow the night of March 7-8 TA 3019.

The last of the southern beacons, (i.e. most northern one), in this area is in Lamedon, as well as the second northernmost beacon:

Then into the Havens of Belfalas toward Dol Amroth:

In LOTRO, as you progress northward from Dol Amroth to Minas Tirith, the southern line of beacons from Minas Tirith to Dol Amroth crosses through Central Gondor and the areas of the Ringló Vale, Dor-en-Ernil and Lebennin. There are three beacons here:

The remaining two beacons (those closest to Minas Tirith) are found in the regions of Upper Lebennin and Lossarnach, completing the southern line of beacons:

The Northern Line of Beacons

In LOTRO, the northern line of beacons is revealed in update 18.

Beginning in Taur Drúadan, progressing away from Minas Tirith: 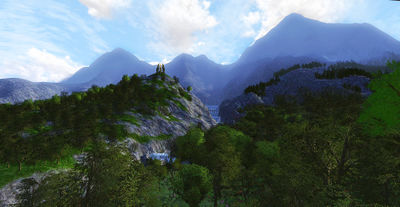 Continuing west through the Beacon Hills to the edge of the Eastfold of West Rohan:

The tomb of Elendil is found on the summit of Halifirien.

"And before that place, the Oath of Eorl between Rohan and Gondor was forged so that in time of great need one would come to the other's aid, as brothers in blood and mind."