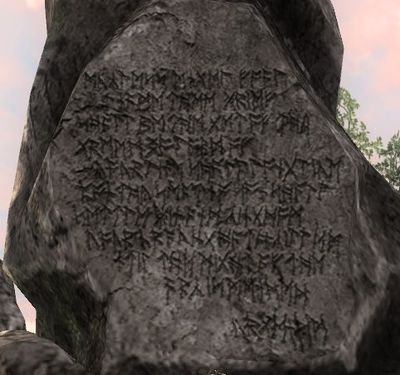 The Stone of Wyrgende is a landmark within the Sutcrofts in East Rohan. Located on the border between Entwash Vale and the Sutcrofts, between Eaworth and Garsfeld [52.8S, 63.9W].

"King Fengel came to the throne when he was very young, and he ruled for fifty years."
"Though long, his rule was ill-starred: he was prone to greed and made many enemies."
"In the last winter of his reign, he was hunting north of the Entwade on a cold afternoon."
"An elderly woman stumbled into his camp. She was lost and hungry."

"King Fengel threw his own dagger at her feet and sent her away into the dark night."
"The King's men were horrified, and they searched for the woman."
"They found her at dawn, frozen to death at the foot of a tall boulder, the King's dagger still in her hand."
"She had carved a curse into the face of the stone, along with her name: WYRGENDE."
"This is what she carved into the stone:

'Feckless Fengel, fool I name thee,
Grief shall be the get of thy greed.
No lord of your line shall long live,
upon thy seat no son shall settle.
Kin and kingdom your craving hath killed,
Until the might of the Mark is mended.
Wyrgende.'

"King Fengel was furious, and he ordered Wyrgende's body burned and the stone destroyed, but no man of his company could more her, and every hammer and mattock they set to the stone shattered on contact."

"King Fengel himself assailed the stone with his sword until the blade shattered, and a shard pierced his thigh."
"The wound festered, and King Fengel died of poisoned blood on the first day of Spring."
"Many in Rohan thought the curse was ended, but now that Prince Théodred is gone..."
"Well, that is the end of the tale, for now."

Horn explains why Éomer wishes to visit the Stone :

'Éomer wishes to visit the Stone, and you must understand why: with the Prince dead, he as Théoden's nephew is now next in line for the throne. He is of King Fengel's line, and the Curse must now be ever in his thoughts. Speak to him, but gently! Who can know what it must be like to live under such a curse?'

Near the Stone there is a learned scholar, Drewett, whom one can question about the Stone.

From this scholar, we also learn what the runes upon the rock are supposed to say:

Runic Transcription of the Stone of Wyrgende

To the right is how the 'Old English' should look like, in the runes used elsewhere in Rohan (Anglo-Saxon fuþorc), line for line.

Drewett also gives us an in-game translation, same as Horn had earlier recited:

"Feckless Fengel, fool I name thee,
Grief shall be the get of thy greed.
No lord of your line shall long live,
Upon thy seat no son shall settle.
Kin and kingdom your craving hath killed,
Until the might of the Mark is mended."

The stone certainly has runes upon it. It's fitting they're a bit hard to read, but still, one can make out enough...

Here's how the runes translate (top to bottom). The letters in parentheses are missing, or really hard to make out.:

(F)eckless (F)engel, fool
I name thee. Grief
shall be the get of thy
greed ngo lord of
your line shall long live
(u)pon thy seat no so(n) shall
settle kin ænd kingdom
your craving hath killed
(un)til the might of the
(m)ærk is mended

From the LOTRO Forums: Daeross -- SPOILERS: The Grandeur of the Epic