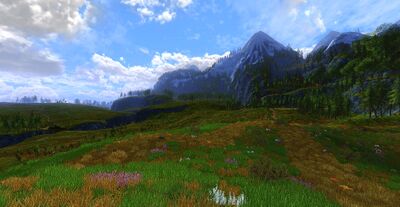 Stonedeans is an area within West Rohan.

The Stonedeans is where the Rohirrim and Dunlendings have lived in relative peace for some time.

Most of the Dunlendings in Rohan were exiled long ago into what is now Dunland, but those who remained stayed in the Stonedeans. However, the tensions have risen of late, as Saruman inspires the Dunlendings to join him and reclaim their old lands.

Saruman has agents everywhere, his influence far-reaching, and he has begun to undermine the leadership of Woodhurst, the capital of the Stonedeans. The city has become dangerous for any Rohirrim living there and many are fleeing.

The leadership in Woodhurst struggle to maintain control while trying to determine friend from foe. Time is short as an army of the White Hand marches upon the city and has claimed most of the southern Stonedeans. Those still loyal to the Rohirrim have to muster their allies or risk being consumed by the White Hand’s war machine.

The Wild Men, with help from Saruman's Orcs and Uruk-hai, control a great deal of the Stonedeans. They prepare to cross the river-gorge at Brockbridge, where a few brave men hold back an endless tide threatening to wash over northern Stonedeans. Should the Wild Men succeed, they will surely march on Edoras to raze the city and its golden hall to the ground.

A region among the foothills of the Misty Mountains, the Stonedeans consists of crags, broken stones, tall oaks and firs, and rushing rivers. A source of many of the metals worked by the Rohirrim, particularly iron mined from the low mountains that surround Nan Curunír.

By no coincidence is this Riding the most similar to Dunland. Historically poor and uncivilized, compared with the remainder of the Westemnet, the Stonedeans have seen many marriages between Eorlingas the Dunlendings. Rohirrim from more prosperous lands even call it "Deanland" in jest.

These landmarks are located within Stonedeans: 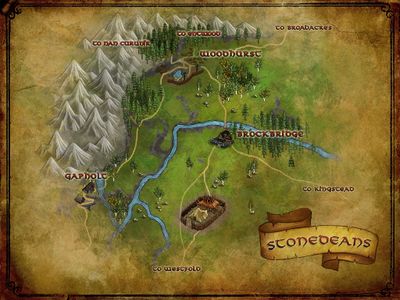 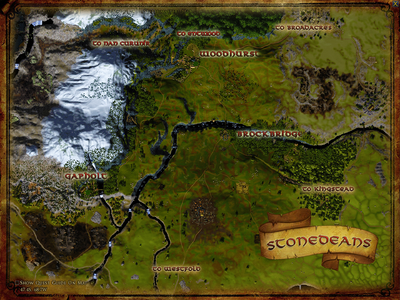 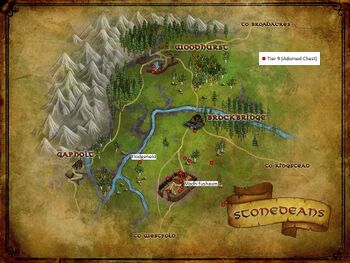