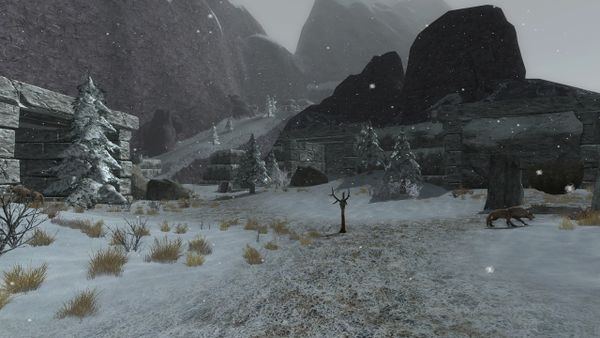 Starkhath is a landmark within Northern High Pass, in the Misty Mountains. [20.9S, 8.0E]

These giant ruins are found in the east-most of the area, just under the path that runs up to the Black Crack. Beginning at the south-most side of this part of the dale, a path winds itself about the steep mountain sides, up over an old giants' stone bridge, into Starkhath. Once a settlement for giants, now these abandoned hovels are used by wargs for shelter from the icy, blistering winds of this area.

Proceeding through Starkhath and over the next stone bridge, leads to Dómstoll and to admire the gorgeous view over the High Pass.

These deeds can be advanced by exploring Starkhath:

A group of travellers who passed this way many years ago described a place where giants capriciously tossed boulders across the pass for sport and amusement.

The giants appear to be gone now -- some say they were driven away when a new Great Goblin took the throne of Goblin-town and relations between the two races became intolerable. In time, tired of being tormented by their diminutive foes, the giants left this place and moved towards Iorbar to the south-west.

Only the massive stone slabs that they once used as shelter remain, echoing with the howls of the Wargs who now prowl among them. — Deed