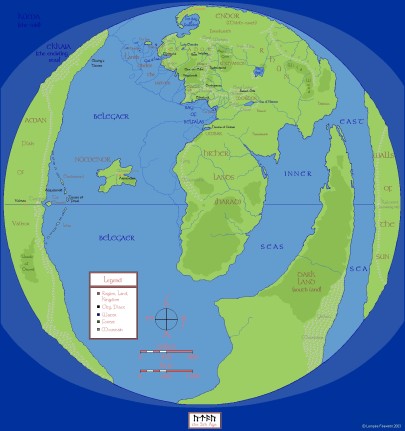 The Second Age began after the War of Wrath and the banishment of Morgoth into the Void by the Lords of the West, led by Eönwë, the Herald of Manwë.

This Age was characterized by the rise (eventually with increased insolence) of Númenor, the rise of Sauron in Middle-earth, the creation of the Ringwraiths, and the early wars of the Rings between Sauron and the Elves.

At the end of the War of Wrath, many of the Elves that remained in Beleriand departed for Valinor. Those of the Edain who aided in the fighting and survived were gifted the new-made island of Elenna where they and a number of Drúedain took up residence. So began the kingdom of Númenor, greatest of the realms of Men, ruled by Elros Tar-Minyatur and his descendants for the next three thousand years. The Númenóreans advanced greatly in learning and art, and for much of their history maintained a friendship with the Elves. Great mariners and explorers, they also founded great cities in Middle-earth, including Umbar the port of Pelargir at the mouth of the Anduin.

As the glory of Númenor grew, so too did their pride and their fear of death, and their voyages became more about conquest than exploration. In 2251, Tar-Atanamir took the sceptre and many in Númenor began to openly oppose the Valar and friendship with the Elves. These called themselves the King's Men, while those who maintained loyalty to the Lords of the West were called the Faithful. These divisions and the discontent with the Valar only grew, until the reign of Ar-Pharazôn and Tar-Míriel. Ar-Pharazôn, after bringing Sauron to Númenor in chains, began the building of the Great Armament and in 3319 he sailed against Valinor, seeking immortality as Sauron swore he would find there. For this crime, Eru Ilúvatar sunk Númenor beneath the sea and removed Aman from the world such that no mortal sailors would ever find their way to the Undying Lands again.

Many of the Faithful, led by Elendil the Tall and his sons, escaped the Downfall of Númenor and came to Middle-earth, where Elendil founded the realm of Arnor in the north and Isildur and Anárion founded Gondor in the south. Among the relics and treasures they brought with them out of Númenor were the palantíri, gifts from the Elves to the Faithful, the Vandassari, and a sapling of Nimloth, the White Tree. The Dúnedain of Anor and Gondor would later join the Last Alliance of Elves and Men and besiege Mordor itself.

After the drowning of Beleriand, Lindon (known as Ossiriand more commonly in the First Age) became the westernmost land of Middle-earth. Establishing new port havens, particularly at Mithlond on the new-formed Gulf of Lhûn, the kingdom of Lindon under High King Gil-galad grew strong throughout the Second Age. Though given leave to depart for Valinor, many of the Noldor, Sindar, and Laiquendi (Green-elves) remained in the lands they had fought for.

The Elves of Lindon maintained a friendship with the Men of Númenor and later of Arnor and Gondor, joining them in the War of the Last Alliance to overthrow Sauron. Sauron in fact came first to Lindon in the guise of Annatar but was turned away when both Elrond and Gil-galad sensed deception. Círdan the Shipwright took up governance of Lindon and the Havens at the end of the Second Age, following the death of Gil-galad in Mordor.

Many of the Noldor of Lindon joined Celebrimbor, son of Curufin and grandson of Fëanor, and founded Eregion in 750 in the holly-forested lands near the West-gate of Khazad-dûm. Celebrimbor and his people were craftsmen and were close friends with the Dwarves of Khazad-dûm. In Eregion the Elves founded Tham Mírdain, the Hall of the Jewel-smiths, which included a school, library, and the great Ring-forges at Mirobel. It was here that the Gwaith-i-Mírdain, the ring-smiths, learned the art of crafting Rings of Power with the aid of Sauron as Annatar. Celebrimbor realized the truth too late, and though the Elves hid the Three Rings and refused to yield the others, they were still vulnerable to the power of the One Ring.

Sauron attacked Eregion in 1693, and by 1697 Celebrimbor was dead and Eregion ruined. Many of these ruins are still visible in Eregion and the Angle of Mitheithel and retain the memories of the War of the Elves and Sauron; Minas Elendúr and the ring-forges themselves hold perhaps the most potent echoes. Elrond, sent by Gil-galad, retreated with the surviving Gwaith-i-Mírdain and founded Rivendell, hiding and recovering their strength while Sauron overran Eriador. In 1700, with the aid of a fleet out of Númenor and the Elves of Lindon, Sauron driven back and there was peace for some time.

Though the forests of Laurelindórenan were already inhabited by Silvan Elves, following the War of Wrath many Sindar and Noldor relocated here. First were Amdír and his son Amroth who, though Sindarin, became King and Prince respectively. Galadriel and Celeborn followed with many of their own followers and eventually took up the rule of the Golden Wood.

In similar fashion, Oropher and his son Thranduil joined themselves to the Silvan elves of the Greenwood, better known in later days as Mirkwood.

War of the Last Alliance

In 3429 Sauron attacked Gondor, capturing Minas Ithil. Isildur escaped and went north to request aid from Elendil and Gil-galad while Anárion held the defence in the south. In 3434 the gathered army of the Last Alliance of Elves and Men came to the Black Gate, defeating Sauron on the Battle-plain and besieging Barad-dûr. The siege lasted until 3441, when Sauron was at last defeated, though at great cost. Isildur cut the One Ring from Sauron's hand and the Second Age was ended.