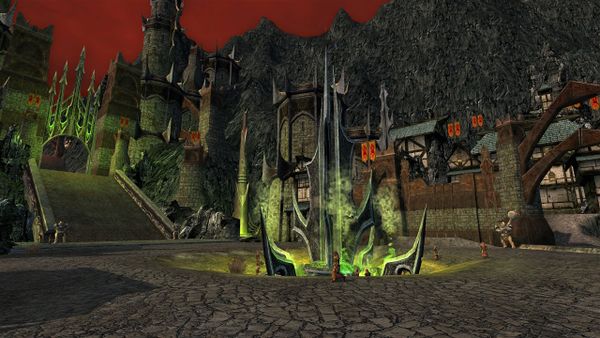 Rhunendin is an area within Angmar in the northern region.

This town lies on the eastern approach to the fortress city of Carn Dûm. Leading from its grand, imposing entrance in Himbar, Rhunendin lies along a road that ascends through multiple gates and archways before ending at the Gate of Shadows, the eastern gate of Carn Dûm. Houses, plazas, and alleyways make up the town, all in different levels of disarray. The streets of the village are inhabited, and thus guarded, by Angmarim, Gertheryg, and hill-men of the Trév Duvárdain tribe.

There are no services in this area, but if having the key necessary to pass the gate at the end of Rhunendin, the scouting outpost of Tármunn Súrsa can provide some services as well as respite from the forces of Angmar. 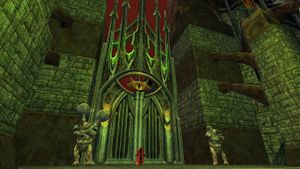 "When Earnur and Glorfindel drove the hosts of Angmar from the fallen North-kingdom, they eradicated the Angmarim west of the Misty Moutains. A short time later, however, the ancestors of the Rohirrim pressed northward on the far side of the mountains and drove the remaining Angmarim back into their former realm, thought they were now scattered and few. Over the long years, the remnants of Angmar begain to multiply and grow strong again, and built towns and villages once more.

"Rhunendin is one such town, guarding the western approach to the Witch Kings former capital of Carn Dûm. The Angmarim remain faithful to their banished lord, and serve his steward, Mordirith, called the false king by the Hill-men who dwell in Angmar. Rhunendin is a mighty bastion against those who would overthrow Angmar once more." — Lorebook