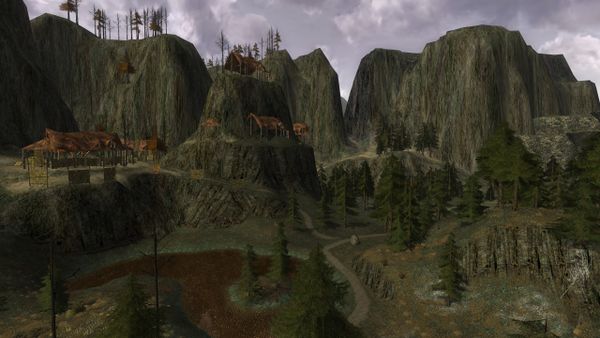 Ram Dúath is an area within Angmar, in the south-western region.

Ram Dúath is a range of black, craggy mountains with maze-like, treacherous passages, and dead-end rifts and ridges. The southwest hosts den to drakes and worms, while spiders and blade-beaks prowl the other canyons. Angmarim and Yrch guard the eastern roads at their respective strongholds of Frith-vailë and Skathmúr, near where wicked Merrevail have set up their nests at Duvairë. While hosting an array of vile creatures, this area is considerably less dangerous and grim than the rest Angmar. It should be noted that the worms and drakes in the vales near North Downs are of much lower level than usual.

Through Ram Dúath it is possible to reach Malenhad in the northeast by fighting through Bail Róva, as well as Aughaire in the northwest. Athwart the only "safe" road from North Downs to Aughaire, a friendly tribe of Earth-kins have built Lehmä-koti, providing a Camp Site Fire, vendors, and some quest-givers. 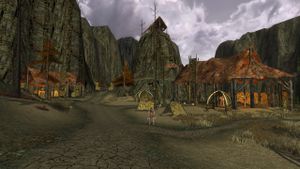 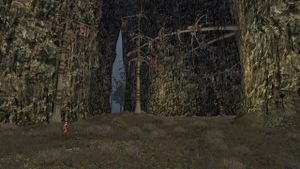 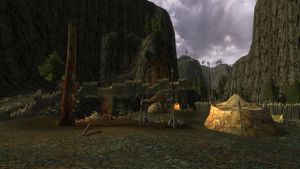 "Far to the north of the Shire – indeed, far to the north of Bree-land and the North Downs – lies a range of black, craggy mountains that bars passage from the North Downs into Angmar beyond. This range is called the Ram Dúath. Over the course of history it has served as a fortification of the Witch-king's realm, and as a cage in which to pen his servants after his defeat. The Rangers of the North keep an eye ever trained on the mouths of its passes, watching for trouble from the cursed lands beyond.

"The passage through the Ram Dúath is maze-like and treacherous, a den to drakes and other fell creatures, as well as home to the strange Earth-kin, gentle giants who hunt the aurochs of the North Downs. Recently, armies out of Angmar have begun to descend through the Ram Dúath, threatening the North Downs and the rest of Eriador beyond. — lorebook