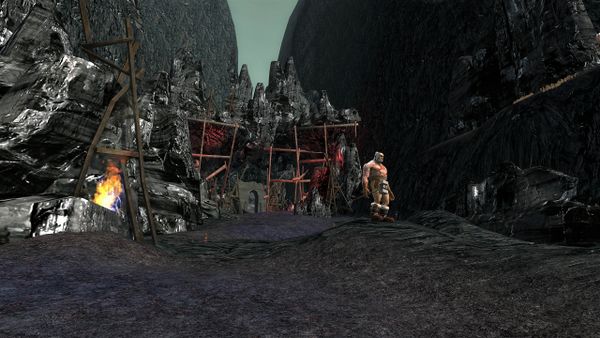 This large iron gate provides the only passage into the northeastern Rift of Nûrz Ghâshu. Passage into the valley is not simple since the gate is heavily guarded by Angmarim, Gertheryg, and Giants who patrol the rocky outcroppings and flaming braziers that light the area.

"The folk of Middle-earth's northern lands have long held the name of Angmar in dread, but in that fell kingdom are places that cause even the minions of Mordirith to tremble. At the feet of the Mountains of Angmar lies the terrible land of death and decay, Gath Uior. Even the Orcs and evil Men who gather there fear what lurks behind the great portal that leads under the mountains. It is said that ever-vigilant guards watch the gates, which were hewn long before the Witch-king first came to Angmar – not to keep enemies out, but to keep something in.

"The Wise say that behind that portal is a passage into a place called, in the Black Speech of the Enemy, the "Rift of Nûrz Ghâshu." Nûrz Ghâshu is little more than a legend among the Free Peoples of Eriador, but like all legends there is some grain of truth to it. Rumour tells of a breed of giants who dwell therein, as well as something far greater, far more terrifying. Whether these tales are true or not, Angmar is preparing to take the Rift and to unleash the great evil that might dwells there." — Raid