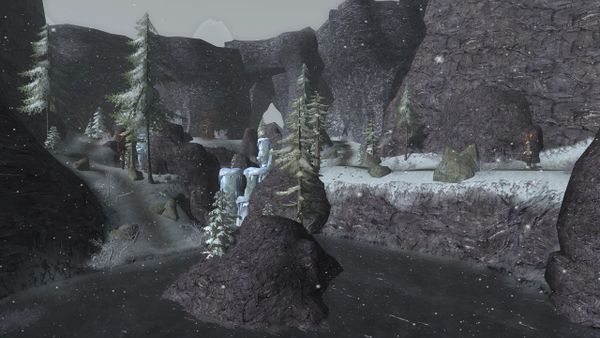 Erforgh Cleft is a landmark within Southern High Pass, in the Misty Mountains. [29.6S, 9.1E]

This large Gauredain camp is situated in the far south-east corner of the area, and it is reached through either of two openings, both from the wider lake south of Northtarn. Both of these passages are marked by the presence of Gauredain and wolves who will fiercely defend their territory.

Innermost of the cleft is a freezing-cold pond with a cliff in the middle, which provides a safe hideout for adventurers wanting a brief rest. Straight east of that cliff is Jakka's camp, the leader of this tribe of Gauredain, but he is untouchable from this point, requiring a more direct approach pf attack.

These deeds can be advanced by exploring Erforgh Cleft:

The Erforgh Cleft is a massive jumble of rocks and frozen streams left behind by some great mass of ice in ages past. Now it offers some semblance of shelter from the most brutal mountain winds to a nomadic tribe of Gauredain who have made their home here.

Whether the Gauredain came here of their own accord or were directed here by the Enemy is uncertain, but their presence is troubling nonetheless. — Deed