Chamber of the Crossroads 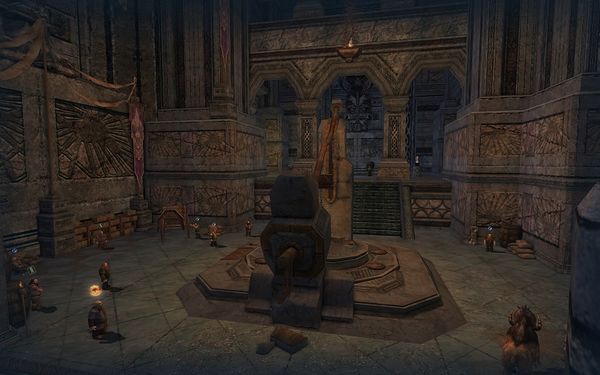 The Chamber of the Crossroads is a settlement at the southwest corner of Durin's Way in Moria [5.1S, 112.1W].

Now a guardroom, this was a major intersection in the maze of Khazad-dûm, linking Durin’s Way to the Great Delving. A well here nearly proved to be the doom of Merry and Pippin, and the guardroom also provided shelter for the Fellowship on their journey through the darkness. This well drops down into the Water-works directly below.

The following services can be found within the settlement of the Chamber of the Crossroads:

The following quests start in, or involve this area.

Examine the Ornate Chest-piece on the ground east of Dolven-view to start this series:

The Hall of Mirrors

The ancient guard room controls the passages leading up into Durin's Way, as well as the ones east, towards the Twenty-first Hall. It is now occupied by part of the dwarf expedition to re-take Moria from the Orcs and goblins.

Once this hall was a major intersection in the maze of Khazad-dûm, linking Durin's Way to the Great Delving. A guardroom here includes a well that nearly proved to be the doom of Merry and Pippin, and also provided shelter for the Fellowship on their journey through the darkness.

Now the guardroom is commanded by Brogur's cousin, Bósi who is forging plans to rid this region of the White Hand of Saruman and other vile creatures. Bósi agrees with Brogur that the White Hand Uruks need to be purged from their encampment at Ninknakh Faltor. He is concerned, however, that Brogur is overconfident and may suffer a fate similar to Balin. Bósi also believes that the discovery of the collapsed Chamber of Mazarbul and recovery of the Book of Mazarbul are keys to defeating the White Hand and what lies beneath. To this end, Bósi and his Dwarf comrades have come up with a daring series of missions to help crush the White Hand. [1]