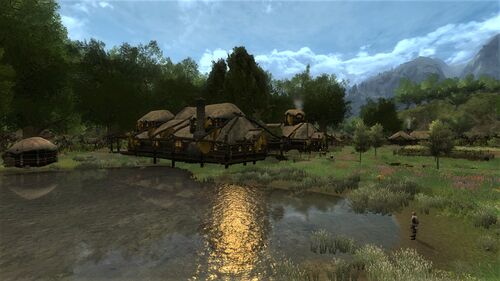 Beorninghús is the home of Grimbeorn and many of the Beornings. It is located within the area of Meadhollow, which is totally enclosed within the Beorning-lands area in the Vales of Anduin. [13.4N, 53.3W]

Access to the area is limited. Beorning characters start here, and will return for several quests. After that they, and all other characters, gain access the during the Black Book of Mordor chapter 10.

NPCs that are found at this location;

On the western eaves of Mirkwood, on the banks of the Anduin, to the north of the Old Forest Road reside the Beornings, a rustic tribe of skin-changing Woodmen. All descendants of Beorn hail from these woods and dales surrounding the Anduin, from the shores near the Carrock up to the High Pass through the Misty Mountains.