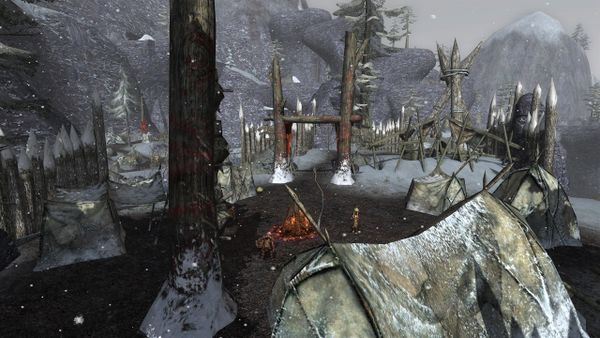 Akûltot is a landmark within the Northern High Pass, in the Misty Mountains. [21.5S, 4.5E]

In the north-western reaches of the High Pass numerous goblins have set up many small camps forming a goblin settlement. In the south-eastern section of these camps is the recently constructed camp of Akûltot. It is a free-standing cliff reached only over well-guarded suspension bridges, overlooking the wide dale and Ghâshru.

These deeds can be advanced by exploring Akûltot:

Newly built since the ascension of the new Great Goblin of Goblin-town, the camp of Akûltot is set among rock ledges and spires that overlook the approach to the main gates of Goblin-town. Historically, the goblins of the Misty Mountains have eschewed the construction of camps in the inhospitable drifts and glaring light of the High Pass, and it is unsettling that they should choose to do so now.

The only likely explanation is that they are preparing to extend their grasp beyond the mountains in some fashion, which is surely ill news to those who live in the hills and forests below. — Deed