The Harrowing of Morgul 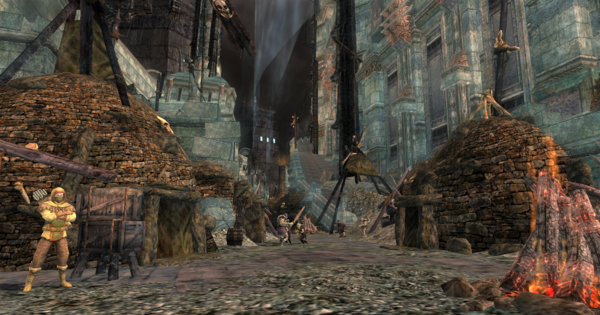 In an attempt to repel the forces of Ugrukhôr and the Rangers of Ithilien, Gothmog's forces have fortified the outermost ring of Minas Morgul. Believing the ire between Ugrukhôr and Gothmog might be turned to your advantage, Damrod has tasked you with igniting a war between the Orcs in Minas Morgul.

This is a scaled instance, designed for a Solo / Duo or Small fellowship (3 players) level 121 and up.
It is available in the Instance Finder.

Estimated completion time is between 20-30 minutes.

These mobs are encountered within The Harrowing of Morgul:

The Harrowing of Morgul Mobs

The first boss, Shaktur has 2 main mechanics. When he says "Gather Round you Maggots" he will do a short range knock back. It doesn't do much damage but you can avoid it by moving precisely to his side. His second mechanic is a frontal AOE cleave. When he says "Don't run" and begins to induct he will become rooted. Moving behind him while he is inducting will avoid all damage from this attack. He will call for a goblin after losing around 1/3 health, and also 2/3 health. Additionally he drops a fire AOE.

The last boss is Dargásh. This is a DPS race with adds and puddles. The boss will drop poisons on the tank slowly filling the room eventually killing you if you don't have enough dps. The tank should start the fight in the corner of the entrance gate and stack puddles on top of each other. When too many puddles are stacked the tank must move to the next free tile slowly moving from one side of the room to the other. The adds can stack bleeds on top of the puddle dots, so it's recommended that you have wound pots. Dargásh has two main mechanics that you need to look out for. When Dargásh says "Minions, to me" he will begin an induction that looks like he is healing. If you interrupt him, he will not summon additional adds. This is important to reduce the amount of debuffs they place on the tank. Dargásh also has a wide range AOE attack which does a lot of damage which he announces by saying "come closer". The tank can easily survive the blast, but everyone else should evacuate the blast range.


An uncommon Enhancement Rune and a piece of uncommon armour or jewellery.


A rare Enhancement Rune and a piece of rare or uncommon armour or jewellery.


An incomparable Enhancement Rune and a piece of rare armour or jewellery.

An incomparable, class appropriate tracery and a piece of incomparable or rare armour or jewellery.