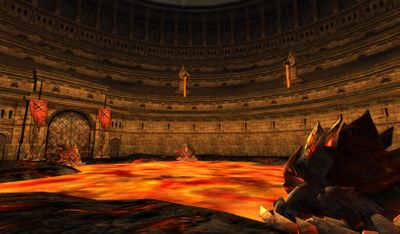 Rescue in Nûrz Gâshu is a skirmish which takes place in the Rift. Since it is a skirmish, it can be started anytime and anywhere, as long as you're not in an instance already.

"Taken by some madness, Golodir has ventured into the Rift. The air is thick with menace, and the stench of Thaurlach lingers..."

In the time he is most needed, Golodir, ranger of the North and still grieving the death of his daughter Lorniel, suddenly disappears. His friend Corunir fears he is not himself anymore and follows his tracks to the Rift. What madness has come to Golodir, travelling alone to such a horrible place? We need to help Corunir find Golodir, and convince him to join the Grey Company, called upon by Aragorn.

The skirmish is meant for level 65 and higher. This skirmish is part of chapter 8 of Volume 3 Book 1, The Depths of Duty. You need to reach this chapter before you are able to play it.

There is one quest in this skirmish, that you will receive automatically when entering and which can be completed once per day. It rewards with extra marks on top of the usual skirmish rewards.

Apart from the normal slayer-deeds, which can be completed in all skirmishes, the following deed is specific to this skirmish:

Since you will only meet one or two of these encounter mobs each skirmish, you will have to do several sessions before you can complete it.

For all possible skirmish lieutenants, see the page Skirmish Lieutenants. The following creatures are encounters within this skirmish:

It is possible you already got encounter updates while fighting the torechs, but it is best to wait with activating them until all three torechs are gone. Otherwise you will be fighting encounter mobs and groups of mobs at the same time, while this is not necessary.

You will likely get two encounters, but sometimes only one occurs. For more info about the eight different encounters in this skirmish, look under Mobs.

Be sure to complete the encounters before you enter Norbar. You can use the emblems for the final boss in there.

Note that you will only meet some of these mobs during the instance, not all.

The instance starts after you talk to Corunir. Follow him when he runs further.

Corunir says: "Golodir is not himself, of this I am certain."
Corunir says: "He is the wisest Ranger I have known. What could have driven him to this place?"
Corunir says: "I cannot understand it. We must rescue him, even if it be from himself."
An ancient fumerole, Torech Lach, has arisen and blocked your path!
The denizens of Nûrz Gâshu are coming to protect the ancient Torech!


From the south a group of mobs will appear. After killing these, Corunir says: "I have found its weakness! Quickly, strike at it! Quickly, strike the Torech!" Run to the torech and strike it by right-clicking. If you are doing the skirmish with more than one person, you will have to perform the Fellowship Manoeuvre Corunir calls out. If you fail to do so, you will have to kill another group of mobs until you are successful.

Torech Lach has been destroyed. The path forward is open.
Corunir says: "Make haste! We must reach Norbar before it is too late!"

Follow the path to the north until a second fumerole appears.

Again a group of mobs will appear from the south. Kill it. Corunir says: "I have found its weakness! Quickly, strike at it! Quickly, strike the Torech!"
Hit the torech. "Excellent hit! Protect me while I find the next weak spot!"
The denizens of Nûrz Gâshu are coming to protect the ancient Torech!

After you've killed the second group of mobs at this torech and again hit it, you will be allowed to continue.

Torech Naur has been destroyed. The path forward is open.
Corunir says: "Make haste! We must reach Norbar before it is too late!"

An ancient fumerole, Torech Ruin, has arisen and blocked your path!
Corunir says: "Protect me while I try to find its weakness!"
The denizens of Nûrz Gâshu are coming to protect the ancient Torech!

Go stand at the platform where Corunir is: the group of mobs randomly appears from the west or the east. This way you will able to see where they come from and be prepared. There will be three groups in total, and after each one you will have to strike the torech (and perform the Fellowship Manoeuvre). Again, if you fail to strike the torech correctly, you will have to fight an extra group for each time you fail.

Torech Ruin has been destroyed. The doors to the Coliseum and Golodir are now open.
Corunir says: "Come, we must enter Norbar and find Golodir!"

After you are done with the encounters, enter the door to Norbar and speak to Corunir again. Your soldier will be dismissed when entering, so quickly summon a new one. Follow Corunir to the other side of the lava lake, where Golodir is. Jump over the lava streams, they deal much damage. Remember to do so, too, in the coming fight.

Talk to Corunir again, and the fight with Erebún will begin. Don't forget to use your emblems! There are several factors you need to consider:

Erebún
During the fight, Corunir will lay traps, visible as blue circles. Erebún will receive huge damage when lured in to this traps. When he has made a trap, Corunir will say: "The trap is set! Quickly, draw him towards it!" and you will know it is time to move Erebún.

Golodir
This factor is not apparent for solo play. If you are doing the skirmish with more than one person, you will have to perform blue and green fellowship manoeuvers on Golodir during the fight to keep him alive. If you fail to do so more than one time, he will die and the skirmish will fail.

Caerogs
This factor is not apparent for solo play. If you are doing the skirmish with a small fellowship or more people, one or several caerogs will wake up (for the exact amount of caerogs, check under Boss). The caerogs will receive a special buff when crowd controlled (e.g. stunned or rooted). This buff is so high (something like -30% damage received) that it is best to avoid CC'ing at all.

After all creatures are dead, you can loot the chest and talk to Corunir to end the skirmish.

Through out the raid you have to complete right Fellowship manouvers/Conjunctions (FM/CJ) to complete the encounter. The CJ's will activate when you hit the Torech Lach (Fumarole/Volcano). White large text appears on your screen and under that a (different colour, that also indicates the button colour) text, that says for example "GUILE GUILE GUILE GUILE" , this means that you have to do "yellow" conjunction with minimum of 4 colours.

Working way to do this is to have one/two tank/s kite all 4 Caerogs, while others kill Erebún first. Caerogs will do knockbacks and can fail your CJ's.

Don't use AoE and remove all damaging pets, so you don't accidently kill Golodir (6,972 morale).

Here you have to do CJ's on (confused) Golodir time to time, the same way that before on Fumaroles. When you activate the fight you will do first CJ on him before mobs activate.

The amount of morale and adds differ depending on the grouping, and probably on the tier as well.
The more people you play this skirmish with, the more Caerogs will awaken from around the lava lake.

After defeating Erebún, remember to loot the chest. Competing the skirmish will reward reputation with The Eldgang. Rewards and Loot scale to the level, group size, and tier of the Skirmish. Loot is found by/at/in/from: