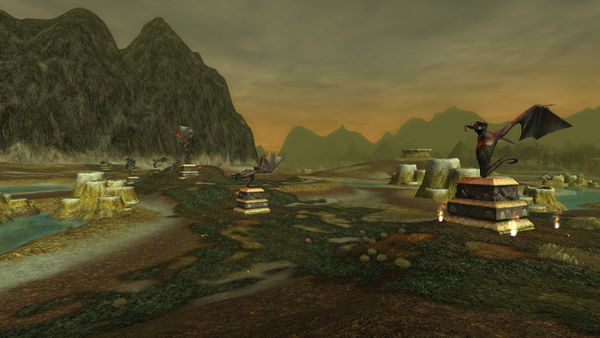 Rammas Deluon is a landmark within Eastern Malenhad, in Angmar. [0.6S, 29.8W]

As a border between Western and Eastern Malenhad, and thus western and eastern Angmar, stand several evil-looking statues at guard. These are the ill-fabled Watching-stones, blocking any who attempt pass to lands east stretching all the way to Carn Dûm.

However, adventurers who have conquered the spirit of a stronger Ancient Watching-stone, found elsewhere, have learned that their power is limited. Hence they will be able to pass through, though under immense pressure on their will. The stones of Rammas Deluon apply 5 Dread and the Evil Presence effect on the traveller, causing Shadow Damage every 4 seconds. Staying on course and being determined that the will of the stones may be defied will help the traveller through.

"In the midst of Malenhad, the vast, sulphurous bog at the centre of Angmar, a great line of statues bars the way into the eastern reaches of that vile land, and thus the passage to Carn Dûm. For many hundreds of years, the Hill-men of Angmar believed them to be mere icons for they seemed to have no power - they were wrong.

"When evil returned to Carn Dûm in the form of Mordirith, the False King, a Ranger from North Downs by the name of Golodir came to lead the Hill-men against their new oppressors. When the army of Rangers and Hill-men crossed the line of Rammas Deluon, the watching stones - for that is what they were - sprang their ancient trap. The spirits that abide within those statues are not mere watchers, but have the power to drain the very hope and life from those caught within their spell. What the fate of Golodir and his army was, none can tell, but ever since none have been able to approach the stones of Rammas Deluon without putting their lives, or at the very least their will, at risk of destruction." — lorebook