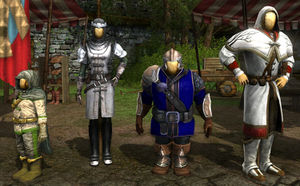 A set of mannequins in Archet.

Mannequins are used by vendors throughout Middle-earth to display outfits for sale. They are usually displayed in a four-mannequin set of a Man, Elf, Dwarf, and Hobbit.

While these originally served as in-world links to the LOTRO Store, they currently use the intermediary Mithril Coin currency. Each outfit costs 50

Set of the Lady's Charge

Set of the White Tree