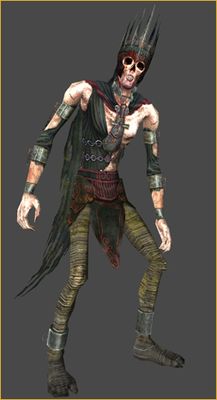 Gaunt Men or Gaunt-men are a species of Ancient Evil.

Gaunt Men are one of the many creatures bred and twisted by Morgoth, the first Dark Lord, in Angband during the First Age. They were once enslaved Men, twisted and made host to fell-spirits.[1] After Morgoth's expulsion from the world, the remaining Gaunt-men went into hiding in the realm that later became Angmar. Their power was greatly diminished, and the White Council mistakenly believed them to have been destroyed.[2] With the return of Sauron, their power has returned and they now walk the world again, along with the other forces of darkness.

As their name indicates, they resemble pale, emaciated mortal Men. They are clearly not alive in the same way mortals are, though unlike wights they seem to wither rather than decay.

Locations where Gaunt Men can be found include:

Gaunt Men are always aggressive, and tend to be of Signature or higher difficulty. They are most vulnerable to Beleriand damage, and to a lesser degree to Ancient Dwarf-make damage, Light damage, and Westernesse damage. They are most resistant to Common damage and Tactical damage.

They commonly bestow a Lurking Sickness which renders the victim Knocked Down and drained of Power if not cured in time. Some Gaunt Men call forth a Summoned Servant to assist them in combat. Loyal servants of the Dark Lords, caring nothing for the lives of mortals, these ancient creatures are certainly Evil in alignment.

The Gaunt-lords are the five mightiest Gaunt-men, chosen from among the lesser Gaunt-men by Morgoth for greater power.[1] When the Five Wizards, sent by the Valar to aid in the fight against Sauron, arrived to lend wisdom to the Free Peoples of Middle-earth, the Witch-king summoned the Gaunt-men to his service at Ufurok, the Dreadfast, hidden in the Morgul Vale.[3] Among them, these five gained yet greater power to match the five Wizards, embodying death, pestilence, famine, war, and purest evil. These creatures are among the most powerful of the Enemy’s servants.

The Gaunt-lords have powers beyond those of lesser Gaunt Men, perhaps foremost of which is the ability to summon fell spirits into the world. They are known to use distinctively marked sigils to do so, and these or similar sigils are also used by the subjects of the Gaunt-lords to indicate their allegiance.[2][4] Gaunt-lords have also shown the ability to turn ethereal to escape, and to transfer themselves into inert bodies.[5][6][7] The leader of the Gaunt-lords, Gortheron the Doom-caller, is capable of reviving his fellows and opening temporary gates to distant locations.[7][5]

The Witch-king appears to have kept records on the five Gaunt-lords in Roz Dagalur, the Fiend-house in Minas Morgul. He may have been attempting to create a new set of Gaunt-lords, but his work remained unfinished.[8]

Gaunt Men were created for The Lord of the Rings Online, using lore surrounding the coming of the Wizards and the physical manifestation of spirits.

The many Gaunt Men that have come forth and been reported are: