This page is about the instance. For the location, see Gath Daeroval, the Shadow-roost. 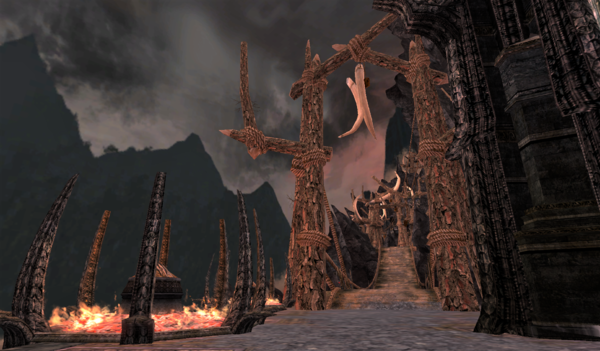 High above the Morgul Vale in a cleft in the side of Achathras, Gath Daeroval is home to the Shadow-roost of the fell beasts. It is said to be home to Khatlob, the massive, voracious brood-mother of the roost, who laid the eggs whence sprang the mounts of the Witch-king and the other Ringwraiths.

The instance doubles as a resource instance for Tier 13 (Minas Ithil) Prospectors, with many Ithil Skarn Deposits found within.

This is a scaled instance, designed for a Solo / Duo or Small fellowship (3 players) level 121 and up.
It is available in the Instance Finder after completing Discovery: Gath Daeroval, the Shadow-roost.

Estimated completion time is between 20-30 minutes.

These mobs are encountered within Gath Daeroval:

Two pairs of orcs guard the first bridge. A Gorthrog Warrior guards the first platform. After raising his hammer he will throw the target around so be careful not to be thrown off the edge or into other mobs. The second bridge is guarded by another pair of orcs and then another Gorthrog Warrior.

Khúrthak the Rent is located on the second platform. A gate closes once combat starts. Again, Khúrthak will throw the target around during the fight (after he says "Away from me pests!") so he needs to be tanked so that he is facing away from the cliff. Once he is defeated, a gate will open allowing progress up the path.

The path up the mountain is guarded by two pairs of orcs. Cannoth waits outside a gateway at the top of the path. After talking to him, two Fell Beast Hatchlings hatch behind the gate before it opens.

Once you enter and start combat, the gate will close behind you. Cannoth stays outside the gate, calling out when eggs begin to hatch. You must throw four Fell Beast Eggs off the ledge to complete this section. When the eggs begin to hatch they become selectable and can be picked up and carried to the edge of the cliff. Once you are close enough to the edge, the egg will be thrown off. If not picked up quickly, the eggs will be destroyed as a Fell Beast Hatchling hatches. During the fight, Fell Beast Hatchlings will also spawn periodically and Khatlob will fly above and spit acid pools onto the ledge. Once four eggs have been thrown off the edge, the encounter ends with Khatlob flying away and a gate will open allowing access to the next bridge.

The third bridge leads to a platform with a Shadow-roost Fell Beast. The fourth bridge is guarded by three Fell Beast Hatchlings. Once these are defeated the gate to the final platform opens.

Khatlob the Brood Mother is on the final platform. She will toss the target around and apply a short stun effect. She also applies a green eye debuff which causes the target to drop

Acid Puddles. So generally the tank will need to fight with their back to the wall and work their way around the closed sides of the platform dropping

Khatlob uses a sequence of attacks. He will knock you back twice, and then use wing buffett in a repeating cycle. When wing buffett is cast it will stun you when you land and you will lose aggro while stunned. You can either anticipate this result by using a force taunt right when it's cast, or you can use a break from stun skill while in the air. Stun immunity will also work.