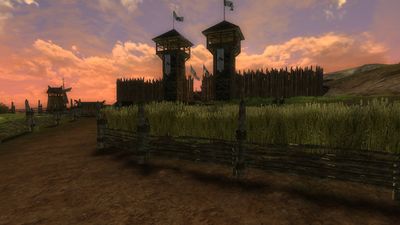 Faldham is a settlement located within the area of Norcrofts in East Rohan. [54.5S, 57.2W]

The settlement is ruled by Thane Elfmar. He is the son of Faldham's true Thane, Elfhelm, who is fighting at the Gap of Rohan. The centre of the town is defended by a wooden wall. This is where visitors find the Mead-hall and many Rohirrim soldiers who prepare for the constant siege of ravaging orcs. The soldiers are commanded by the elite group of guards called "The Elfward". These are Elfmar's most trusted and skilled troops. The other soldiers have accompanied the Reeve Athelward to fight for him.

Outside the walls are several farmsteads found. The crofters here are most stubborn. They refuse to leave their farms even though the Reeve has ordered them to evacuate to Edoras or Cliving. This is what caused the Elfward to stay because they are pledged to defend the people of Faldham.

The following services can be found within the settlement of Faldham:

The following deeds can be advanced by visiting this place

Inside the Mead Hall:

Around and within the farmsteads: