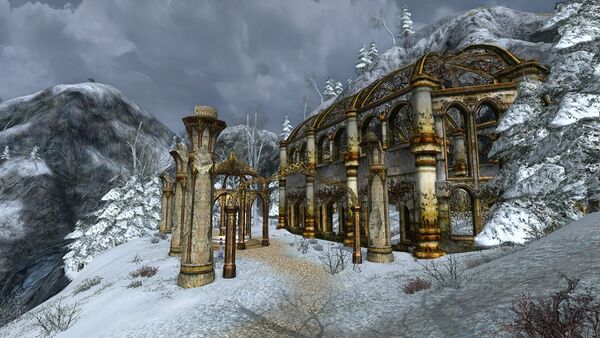 New Dwarf and Elf characters enter this area during the Elvish/Dwarf expedition to Skorgrim's Tomb where this is a busy camp, full of people, vendors, and trainers. The setting is about 600 years after the fall of Refuge of Edhelion which new elf characters witnessed, and shortly thereafter some remarkable findings in the Silver Deep which new dwarf characters witnessed. Elladan, son of Elrond, leads a team to investigate the curious events of recent but also because of a dream that bothers Elrond since not long ago.

After the introduction period only Isdi, a Lore-master, is found at this dismal camp site.

The name of this location is only given by Elladan in some elven quests, and is not identified on the map.


During the Intro period

Involving:
During the Intro period

This is a small camp of Elven explorers, merchants, and trainers, led by Elladan, son of Elrond. They have established a temporary base of operations along the path from Thorin's Gate to the ruins of Refuge of Edhelion, and work to unravel the mysterious happenings in the area.

This camp is this busy only during the introduction quests for Dwarves and Elves; most of the NPCs here will move to more permanent locations in Celondim or elsewhere in the world after the player has completed the final quest of the Introduction sequence.