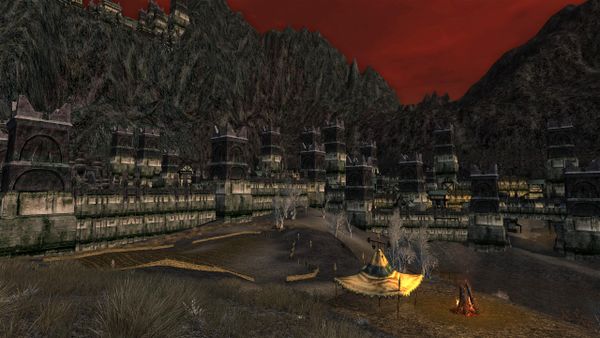 This hill-men town can be found in the north-eastern section of the area, crouching under the shadow of Carn Dûm. The town is overrun by the Trév Duvárdain tribe and their Angmarim allies. All gates are blocked but one, at the south-eastern end of the town. From there a zigzag route runs though the quarters until reaching its northern sections. The innermost section is patrolled by elite Angmarima and there are found two bosses, Muiráthakh who is dubbed the "Silent Judge", and his executioner Fûshath the Beast.

There is a small remnant of friendly hill-men who are silently opposing Angmar when they find chance. They quietly offer missions to those brave enough to assist them.

There is a back entrance directly to the group of friendly hill-men of Donnvail. [6.8N, 35.3W] 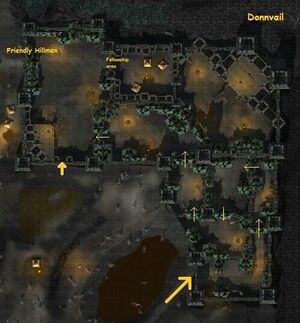 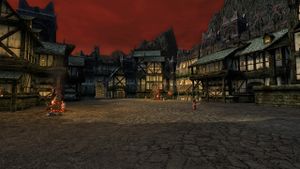 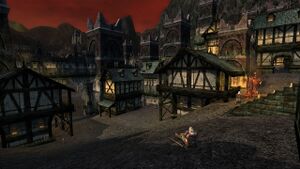 The narrow section just inside the gate

"In the western reaches of Angmar lies the village of Donnvail, the home of Hill-men friendly to the Rangers of the North. These people, unlike their brethren in Aughaire, live under the direct oppression of the Angmarim and their masters in Carn Dûm, swearing fealty to the Witch-king of Angmar. They spend their dismal lives farming and hunting to feed the evil hosts of Mordirith, the False King.

"Though some of the simple folk of Donnvail see through the veil of lies with which the Angmarim have blanketed their town, there is little they can do to throw off the shackles of their oppression. Others readily betray anyone who dares to speak against Angmar, seeking only to curry the favour of their masters." — lorebook