"Deep in the frozen wilds of Forochel, the Arnorian fortress Agoroth lies hidden. Although no living souls have set foot there for thousands of years, thou now findst thyself in a race to reach its vault before the forces of Angmar."

Agoroth, the Narrowdelve is a scalable instance located deep under Jä-reitti, in Forochel. [7.2N, 66.3W]

This instance is part of the Wildwood Quest Pack (free to VIP accounts, or purchased for 1,195

in the Lotro Store).

This is a scaled instance, designed for Solo, Duo, or Small fellowship from level 45 and up.
It is available in the Instance Finder.

Mobs in this instance can put a heavy not potable fire dots on the characters, after clearing the adds to the central lake, characters can remove these by running into the lake. After the lake there are two possible paths to follow. Left side has a guaradan add and the Rúcrog Hoarpelt boss, while the right side has Angmarim and the Aigrith the Ashen boss. Depending on which boss the group choose to fight first, the opposite boss will gain one extra special attack.

After defeating both of the bosses, the central path opens and there is a long role-play sequence that can be skipped just by running further up to the Helcessar. All characters have to stand for a couple seconds without movement in a yellow circle to get teleported to the ship, where the final boss fight against the Storm of the Witch-king happens. Starting this fight requires all characters to be present, because they all need to stand on marked positions for the boss fight to start. 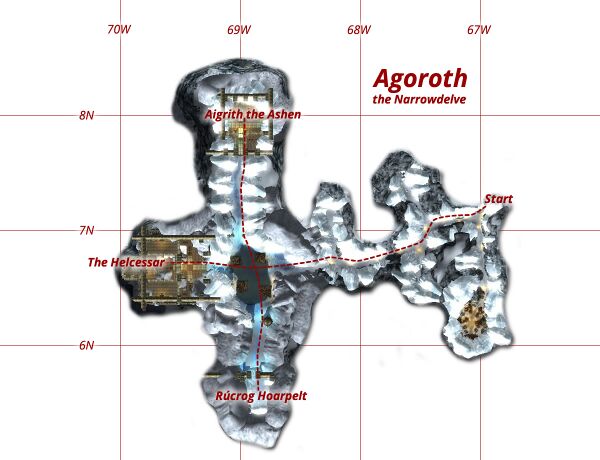