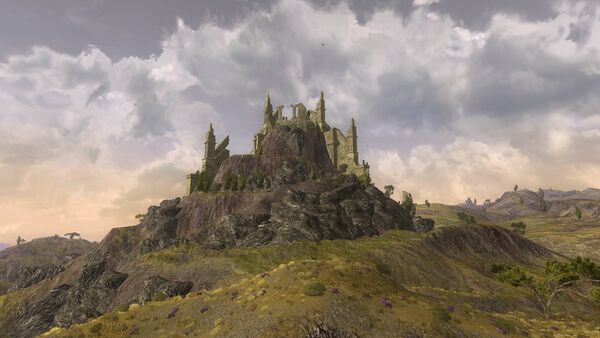 It was once known as Amon Sûl, and is the highest point in the Lone-lands. Once it was home to the great palantír of the North; now nothing but bare ruins stand to show where a mighty tower stood at the heart of Arnor. The palantír was lost in the Ice-bay of Forochel with Arvedui Last-king. The tower itself was destroyed in T.A. 1409 when an invading force from Angmar drove king Arveleg I to the Weather Hills, where he was at last slain.

Gandalf the Grey fought a terrible battle against the Nazgûl there recently, a few days before a small party of travelers came through on their way to Rivendell. There Frodo was stabbed by the Witch-king of Angmar and nearly died.

Not long after, the Ranger Candaith was forced to defend Weathertop against foes called forth by the fell powers that had twice attacked the hill and twice been driven back. Players can take part in this battle in the Stand at Amon Sûl skirmish. At the southern summit the observant visitor may find Dewitt the Explorer and Floid, the mighty steed. Candaith is found by his camp just north-west of the foot of Weathertop.

These deeds can be advanced by exploring Weathertop:

The Tower of Amon Sûl was founded by Elendil at the Weathertop in II 3320. It was overthrown by the Witch-king of Angmar in III 1409. The Elvish name is Amon Sûl (Sindarin for Hill of the Wind), but Men name it Weathertop.

Amon Sûl stood near the centre of the ancient North-kingdom of Arnor, and Elendil built a tall tower on its summit to hold the chief palantír of his realm, the largest and strongest of the three owned by the North. In later days, Arnor broke into three smaller kingdoms, and the Tower of Amon Sûl marked the point where the three met. The Tower was destroyed at last by the forces of Angmar, but its palantír was rescued and carried away to Fornost.

At the end of the Third Age, the Tower of Amon Sûl had been a ruin for centuries, but the hill still marked the highest point for many miles in any direction. — lorebook

Weathertop, the great hill of Amon Sûl, was once the site of a great watch-tower which was razed by the Witch-king of Angmar after he discovered that the palantíri which was once contained within had been taken west by the king of Arthedain. It is a place hallowed by Rangers. — Deed