You may change vocations later, if you change your mind, but you will lose any experience gained in those professions which would not exist in the new vocation.

The vocation system is designed to encourage community inter-dependence by making some professions dependent on others for subcomponents. Because of this, many of the vocations naturally complement others. Also note that many high level item recipes require faction reputation to acquire and use so it is not possible for low level crafting Alts to make these items.

Professions in each Vocation

The following table shows the professions (top row) associated with each vocation (left column). The three gathering professions are listed in italics.

The forces of the Free People are outnumbered, and the might of the Enemy's forces is evident. A skilled warrior must not only defeat his opposite number, he must survive! To do so requires an Armourer, to create defensive gear that can turn aside a Troll's blade if need be! A skilled Armourer is both a Metalsmith and a Tailor, and can gather his own metals via Prospecting.

"Armsmen are capable of crafting any weapon their fellow adventurers might ever need, so this is an excellent vocation for anyone who relies on their fighting abilities. An Armsman is proficient in mining and smelting, but will need to trade for wood with which to make bows, spears, and the like."

The Explorer as Forester (harvesting wood and tanning hides), Tailor and Prospector

"Explorers can live off the land, crafting leather armour and clothing while gathering resource they come across. Explorer is an excellent choice for anyone who wears Light or Medium armour, or wants to specialize in resource gathering."

An Historian: as Farmer, Scholar, Weaponsmith

"Historians are unique in their access to the Scholarly arts, allowing them to research ancient lore and use their discoveries to the advantage of their fellows. In addition, a Historian has the more practical talents of cultivating land and forging the blades that are so often spoken of in the histories they study."

The world of Middle-earth is ancient and varied, and for we Historians, our goal is to understand it, from the mystical to the mundane. A Historian has three main areas of study. First and foremost, we are students of Scholarly arts, focused on collecting relics of earlier ages and putting that knowledge to practical use. In addition, our studies of historical weapons have led us to learn their craft, and our near universal appreciation for pipe-weed has led many of us to learn the secrets of its cultivation. 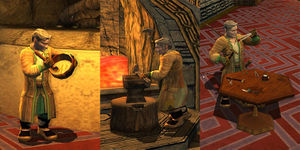 A Tinker: as Cook, Prospector, Jeweller

"A Tinker’s greatest skill is that of jewelcraft, and a skilled Tinker can create baubles of both beauty and utility. A Tinker can harvest the precious metals and stones He needs for his work, and given the long hours his trade requires, it is good that a Tinker is a fair hand at preparing a hearty meal!"

As the third age rises, decay of the great races surrounds us. And yet, there is still a place for us to create new wonders from the ashes, be they lasting jewels, or the simple pleasures of fine meals.

The tinker will require food grown by a Woodsman, Yeoman, or Historian for their cook recipes. Otherwise, they are self-sufficient, since prospecting provides most of the supplies for making jewellery.

Tinkers may assist Historians by providing the ingots necessary for their Weaponsmith recipes.

"Woodsmen are the foremost bowyers in Middle-earth, and are capable of crafting fine weapons from wood, as well as gathering and treating the raw wood they need. Their knowledge of plants and nature also makes them natural Farmers. Woodsman is an excellent choice of vocation for anyone who wants to create their own mighty bows."

A woodsman knows the secrets of survival- in a dangerous world, we know that the best defenses are a swift bow and the ability to endure. A woodsman has four primary skills of note: the ability to gather and process wood, the skill to craft that wood into fine weapons and tools, the ability to process hides into leather, and the knowledge to plant and harvest a bounty of food. 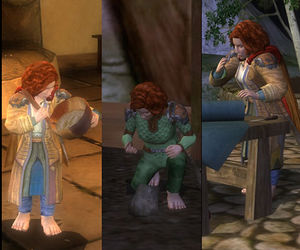 A Yeoman as Cook, Farmer, Tailor

"Yeomen are the salt of the earth, tilling soil and preparing food with natural skill. They are also able to create clothes and leather armours, though they need to trade their produce for the hides required."

Not all heroes are known by their skill at arms, or ancient knowledge. In this difficult time, hard work is a heroic trait by itself, and a Yeoman knows that lives are staked on the backs of honest labourers. As a Yeoman, you will farm, cook, and make simple armour that will provide the foundations of life for the good people of Middle-earth.